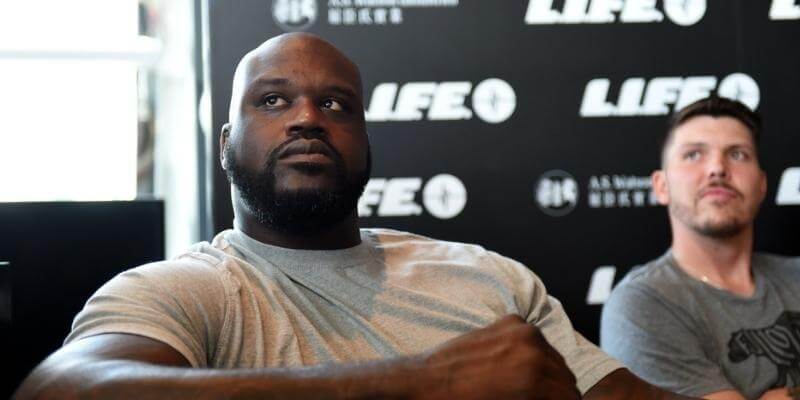 Every basketball fan has an indelible image of Shaquille O’Neal that they probably can’t get out of their heads. Maybe it is the early highlights of a young Shaq leading a fast break or ripping down basketball hoops. Or maybe you are a fan of older Shaq hoisting trophies for the Lakers and Miami Heat.

Either way, you may not have noticed which jersey number he had on while he made your jaw drop. You may be surprised, however, to know that Shaq wore 4 different jersey numbers during his career: 32, 34, 33, and 36.

Shaq played over 1200 career games, and even though he will go down as one of the most dominant players ever, he moved around the league a lot.

Before he became a superstar, Shaq was just another hopeful trying to gain traction on his high school team. Although his situation was much different than most non-seven-foot high schoolers, Shaq still had to prove himself worthy of the next level and beyond.

When Shaq began playing basketball, he looked to Kareem Abdul-Jabbar as an idol. Kareem wore number 33 for the Lakers and Shaq looked to follow in his footsteps. There was just one problem: his high school didn’t have a #33 jersey. Shaq improvised, and chose number 32 instead.

Once O’Neal got to college at LSU, the number 33 was an option again and he snatched it up. He made a big name for himself with that jersey on and, in 1992, became the most sought-after rookie in recent NBA memory.

Shaq was drafted in 1992 by the Orlando Magic, a new team to the league after it expanded in 1989. O’Neal was the prize of the 1992 Draft, but it wasn’t a given that he would waltz into the locker room and own the room. It was apparent early on when Shaq realized another Magic player, Terry Catledge, already wore number 33.

O’Neal didn’t make a fuss, however, and simply chose 32. He even famously joked that people may mistake him for Magic Johnson running fast breaks in Orlando. The foreshadowing of that statement is ironic (I’ll explain later).

Interestingly enough, Terry Catledge played for Orlando for just two seasons and was out of the league in 1993. Shaq was happy with 32 at that point and stuck with the jersey until his time in Orlando ended in 1996.

On the court, Shaq’s Magic team was young, exciting, and really good. They made waves in O’Neal’s second season, winning 50 games – a then franchise record. The following year, Orlando shocked the world by making the NBA Finals. They even beat Michael Jordan and the  Chicago Bulls albeit in the season that Jordan was rusty after his first “retirement”.

The following year, Orlando got swept by the Bulls, and the relationship between Shaq, the Magic, and their other star Penny Hardaway was beginning to show cracks.

After becoming a free agent, Shaq signed with the Lakers. O’Neal now had a choice about his new jersey number because 32 was retired by the team. The person who wore it before it was retired? Magic Johnson, the same player O’Neal joked about emulating while running the fast break in Orlando. O’Neal chose number 34 for his stint in LA.

Shaq entered his Golden Years in LA, winning three titles from 2000 through 2002. The break-up with LA was a little rough and mirrored the Orlando fiasco. Shaq was unhappy with the other star on the team, Kobe Bryant, and had trouble sharing the team with him.

The relationship was never going to work forever, and Shaq was the one sent packing.

Ultimately, Shaq decided to take the reigns of his own team and took his talents to South Beach with the Miami Heat. Interestingly enough, the Heat entered the league in 1989, the same year the Magic did, making Shaq one of the players to play for both squads.

Shaq again went back to jersey number 32 for his time in Miami, which was fruitful. The Heat won the title in 2006 behind Dwyane Wade and an aging, yet still effective O’Neal.

The last three seasons of O’Neal’s career looked more like that of a journeyman than it did future Hall of Famer. It did, however, add another jersey number change.

Shaq’s career was coming to a close. Both basketball miles accrued and injury woes sidelined Shaq more than he would like during this time. He was past his prime, however, and never took to body conservation the way other aging stars, like his idol Kareem, Steve Nash, and LeBron James, did.

In Cleveland, Shaq was finally able to wear jersey number 33. His time there only lasted a season, however, before heading to his final stop in Boston.

Boston saw another jersey switch. Shaq wore number 36 with the Celtics in an odd move. In a very Shaq-like move, he chose 36 as it had never been worn by anyone else in franchise history. Since Shaq’s retirement, the jersey has been worn by Marcus Smart, but the Diesel was the first.

Shaquille O’Neal is one of the best basketball players ever. Both his individual and team’s successes over his career are proof that he was one of a kind. His jersey numbers stayed relatively the same throughout his career with a few shifts. But, just as his performances over his 18-year career, Shaq’s jerseys stayed consistent up until the end.

What is your favorite part of Shaq’s career and what jersey number was he wearing then? Let us know below in the comments!