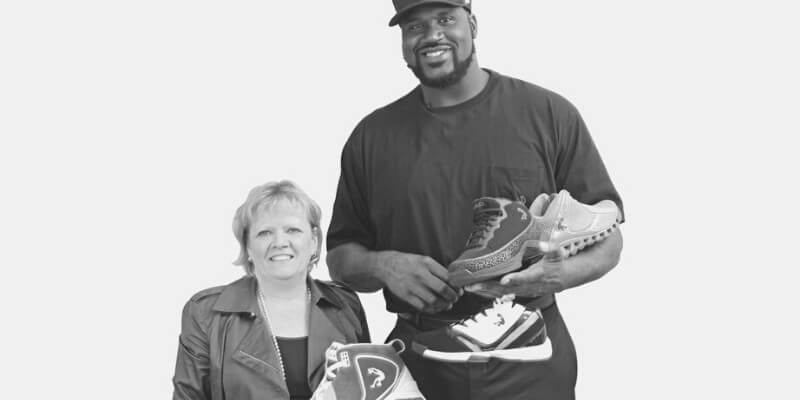 For any basketball fan over the age of 35, you know how special Shaquille O’Neal was on the court. The 7’1” 300+ pounder roamed the court for 19 NBA seasons and dominated the league for most of that time.

For a seven-footer to have such a long promising career, Shaq definitely had some luck on his side. But his equipment, namely the sneakers he rocked for 1200 games, had to be on point as well.

But there is a rumor going around that Shaq wore Payless shoes during his time in the league?! Is that true? The answer is yes, he actually did.

This article will put to rest the details of that rumor and drop some knowledge on Shaq’s history with his fans and the exorbitant signature sneaker market.

When Shaq entered the NBA in 1992, every team would have given half of their roster for the ability to draft him.

He wasn’t the only “sure thing” in the 1992 NBA Draft – the others were Georgetown’s Alonzo Mourning and Duke’s Christian Laettner (coming off of back-to-back NCAA titles) – but most projected him as the consensus #1 pick. He did go #1 to Orlando and Magic fans, a team that was only four years old at the time rejoiced.

Shaq was the hottest marketing commodity and the signature shoe market was making waves with the meteoric popularity of Michael Jordan’s Air Jordan sneakers. The obvious question was “which sneaker company would he sign with?”

Nike had an opportunity to sign Shaq, but when they gave his NBA rookie rival Alonzo Mourning, O’Neal took it personally. He went into his Nike meeting dressed head to toe in Reebok gear and the writing was (quite literally) on the wall.

Reebok laid out the red carpet for Shaq, giving him a $5M deal and promising him control of the creative process around the design and marketing of his sneaker.

Shaq’s first sneaker was called the Shaq Attaq and was very popular. The design was similar to another highly popular Reebok sneaker, The Pump. They were both uber high tops, great to wear for big men who prioritized strong ankle support. In fact, the Shaq Attaqs had the pump technology in the tongue for supreme fit and comfort.

Shaq’s rookie year exceeded expectations from a player and sneaker standpoint. He finished his rookie year averaging 23 PPG, 14 RPG, and 3.5 BPG on his way to an All-Star nod and Rookie Of The Year win.

The next few iterations of the Shaq Attaqs, however, never gained traction. They sold decently behind his overwhelming star power but never caught hold of the sneaker world like other classic ‘90s kicks.

Shaq would get five more signature shoes – the Shaqnosis, the Preacher, the Dunk Mob, the Shaq Reflection, and the Shaq Steel – before changing the way he marketed his sneakers to his paying fans. During this time, O’Neal was traded to the LA Lakers and was now the gold standard of NBA centers.

If everything was going so well on and off the court, though, what prompted him to change his sneaker approach?

When Shaq still played for the Magic, he encountered a fan who changed his life. As Shaq recalled, she was a young mother, and she was mad. “Why don’t one of you sons of b****** make an affordable sneaker,” Shaq remembers her saying.

He told her he didn’t make the price and offered to give her some money. She didn’t take his money, and she wasn’t buying his excuse that there was nothing he could do about it.

Shaq and Reebok parted ways in 1998 and O’Neal decided to go out on his own. He signed with ACI International, an LA distributor of Chinese-made footwear, and launch an apparel company called Dunk.net.

In 2001, however, Shaq decided to rebrand Dunk.net into the Dunkman sneaker model. In what was one of the smartest moves in Shaq’s business career, he created the sneaker that would change the affordable sneaker business for decades.

The Birth of Shaq and Dunkman

That interaction stuck with Shaq and spurned his decision to begin making affordable basketball sneakers for kids. O’Neal began talking with sneaker makers and distributors and created his Shaq and Dunkman brand sneakers.

In 2005, sneaker outlet Payless Shoesource began selling the Dunkman sneaker for $39.99 for men and $24.99 for kids. O’Neal also began wearing his own Shaq sneakers beginning in 2005 and won a title in them with the Miami Heat in 2006.

This act of sneaker loyalty showed his fans that Shaq puts his money where his mouth was by wearing his own sneaker. This wasn’t just a ploy to make money, in Shaq’s eyes. He truly wanted to make good, reliable sneakers for those who couldn’t shell out the $100+ just to wear their favorite player’s kicks.

In an article back in 2005, Shaq explained why he moved his sneakers from places like Foot Locker and Finish Line to “downstairs markets,” a term that describes the value stores like Payless, Kmart, and Wal-Mart.

“Nobody was doing the downstairs market,” said O’Neal. “See, you’ve got to realize this world we live in there’s more downstairs people than there is up.”

Not only was the choice to sell his sneakers at a lower price a thoughtful move, but also a financially savvy one. At the end of Shaq’s time with Reebok, the mega-brand mentioned to him that his sneakers weren’t selling as they had hoped. It was a big reason the two parted ways.

When he was essentially dropped by Reebok, Shaq never looked back and he has made a LOT of money from his unconventional decision.

As of November 2020, Shaq had sold 150 million pairs of his Shaq sneakers in Wal-Mart. His Dunkman shoes were a huge hit in Payless stores before the company went bankrupt in 2017.

The sneaker world isn’t the only place Shaq has shown off his business acumen. For those who either remember him as the over-confident NBA center or current analyst on TNT’s Inside the NBA, there is a lot to Shaq behind the scenes.

An admirable facet to Shaq’s business moves is that he backs companies with which he has a personal connection. If anyone has ever seen a The General Car Insurance commercial and wondered why the heck Shaq is in it, you now have your answer.

He also invests in real estate projects aimed at assisting homeowners facing foreclosure and always looks to help people financially in his pursuits.

In an era where every athlete’s sneaker costs an eye-popping amount of money, Shaq’s affordable shoe venture is a refreshing one.

Not only did he slap his name and image on the sneakers, but he also proved that they were well made when he wore his Payless sneakers on the court during NBA games.

For anyone who has played basketball competitively, you know the quality of shoes needed to take the beating on the court.

Shaq’s off-the-beaten-path approach to business has gained him notoriety and made him a lot of money. He stands behind what he believes in, including the footwear he rocked while dominating the paint and winning NBA championships. Bravo, Shaq Diesel!

Have you ever worn Shaq’s sneakers from Payless, Kmart, or Wal-Mart? If so, let us know how they handled the court in the comments section below!