What Shoe Size Does Shaq Wear? 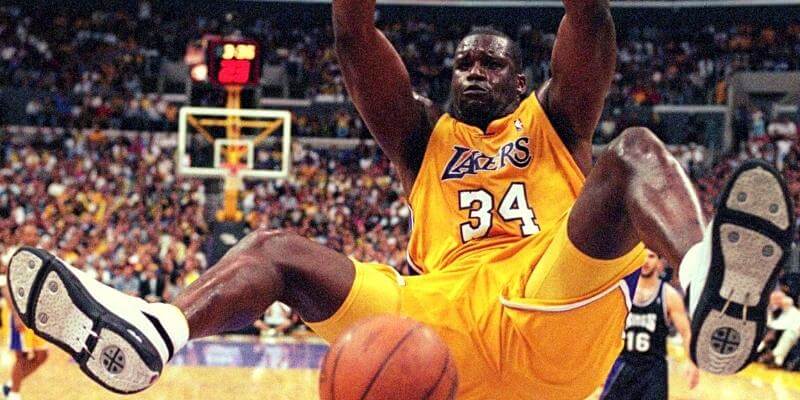 All NBA players are big, but some are much bigger than others. Even in a league where the average athlete stands over 6’6, there are a few who tower above the competition. Shaquille O’Neal is one such player, and he was known for his absurd dimensions.

The following article covers Shaq’s size by looking at his sneakers. His larger feet show, not just how big he was compared to other centers, but how his shoe size helped inform his game and push him to the top.

Most NBA players have big feet. However, that’s relative to their body size. The average player wears around a size 15. That’s far beyond any regular person, but it shows how wide the spread is across the league between guards, wings, forwards, and centers.

There are plenty of points with unusually large feet, and there are more than a few bigs who have small feet compared to their towering frames. Even so, many athletes’ dimensions line up exactly where you think they would. Shaq is one such example.

Shaq stood 7’1 and weighed over 300 pounds for his entire career. Those dimensions put him as one of the biggest players of all time, especially when compared to the leaner centers of today. Where quickness is valued right now, he was all about strength and power.

Everything about the Lakers centers was supersized, including his shoes. He wore size 22 when he played, which makes his feet some of the largest in NBA history. In fact, only one other player (7’7 Tacko Fall) is on record as having shoes that go beyond the 20 mark.

That’s important to note because it shows how Shaq played. Big feet, for the most part, mean a big frame. He wasn’t a stretch the floor center who tried to move up and down the floor, he was an absolute powerhouse who tried to bully his way to the rim as much as possible.

To do that, he needed a solid base. While (relatively) smaller feet can give centers more mobility when they’re down in the post or trying to set up an outside offense, large ones provide much more power. That’s what Shaq needed, and why his shoes helped inform his game.

He played a style of basketball that no longer exists, and he never would have been able to do it if he didn’t have the dimensions he did.

Shaq’s feet are unusually large, but his playing shoes are not the same as the ones he wears in his day-to-day life. The big admitted, far after his retirement, that he sized up in the NBA because he wanted a bit more wiggle room.

He grew up poor, which meant his shoes were never quite the right size. His feet were always squished, and his sneakers were always tight. Once he got money and came into the league, he vowed he would never have to deal with tight shoes ever again.

Traditionally, he wears a 20. While still impressive, that puts him much more in line with similar players. For the most part, athletes who stand near or above 7 feet tall wear an 18, 19, or 20 sneaker. Shaq’s casual wear matches that.

Shaq’s one of the biggest NBA players of all time, and his shoe size shows that. He used his frame in a way few athletes have ever been able to, and his feet gave him the ability to plant and move like he wanted. They weren’t fully to blame for his success, but they certainly helped.