What Does a Shooting Guard Do? 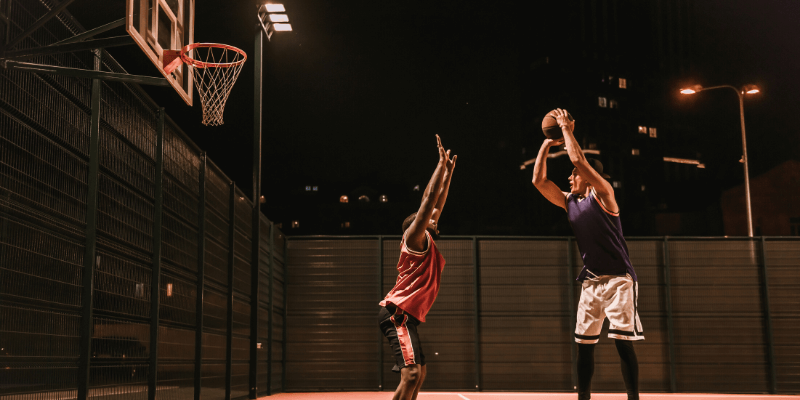 A basketball team is comprised of five players on the court, all with different positions and responsibilities. One could argue that the most important of those positions is the shooting guard which could play the biggest role on a basketball team.

The shooting guard is called a number of different things as well. Some of the most commonly used names used during a basketball game are: two guard, off guard, wing, and swing man.

The beauty of the game of basketball today, primarily professional although the trend is catching on in the lower ranks, is that every player is talented enough to play several positions depending on the scenario. This is a description of the shooting guard in the traditional sense but because of the evolution of the game, can always be open to interpretation.

So, in the traditional sense, what does a shooting guard do?

They are Traditionally Good Shooters

It is no coincidence that five out of the top eight best 3-point shooters in the NBA last season were shooting guards.

If we want to expand our view of shooting guards in NBA history in terms of top shooters ever to play the game, 15 of the top 20 players with the best 3-point shooting percentages ever were shooting guards, with Steve Kerr, who played shooting guard, topping that list.

Two of the most famous shooting guards ever, Ray Allen and Reggie Miller, top the list of most three-pointers ever made in NBA history.

The proof is in the numbers here and with up and coming talent like Klay Thompson, Devon Booker, and CJ McCollum currently reigning threes in the league, the trend of shooting guards with a knock down stroke continues.

They Play on the Wing

There are several different categories for shooting guards and one classification they fall under are what is called a “wing player.” The wing is the area on the court just outside where the three-point line begins to curve towards the top of the key. It is one of the most frequently utilized area of the court to receive a pass from the point guard at the beginning of an offensive possession.

Shooting guards tend to begin their offensive sets there for a couple of different reasons.

Because shooting guards tend to be above average shooters, they also tend to score the basketball at a higher rate than others on the team. More importantly, if 4 or 5 of the baskets they score are three pointers, that is an extra 4 or 5 points to add to their point total at the end of the game. A big difference between that and a forward who mainly scores two pointers under the basket.

Being the wing player that they are means they are one of the first people to touch the ball on offense after the point guard. This gives them the option to look at the basket early in the possession and see if they can create a shot.

They also put themselves into great positions to score due to the amount of screens they receive from others on the team either to get them open for a jumper or cutting to the basket for a layup.

They are Usually The Second Option to Handle the Ball

If a team’s point guard is being pressured too much the players on the team usually come back to the ball to help with the ball handling duties. The first teammate to do this is usually the shooting guard.

This is helpful in a number of different ways for the team but the biggest is that a shooting guard is usually capable of starting the team’s offense when they bring the ball up the court.

The importance of the shooting guard to a basketball team is undeniable and it all comes down to the amount of responsibility they have on the court.

The scoring, passing, and ball handling done by a shooting guard is unlike any other position on the court unless you have a transcendent player on your team that can do it all, like LeBron James.

They also spread the court out with their 3 point shooting ability so that the rest of the team has space to operate and make their own offense. And with the amount of screens being set to get the shooting guards open, it promotes a lot of movement on the court which is the sign of an effective offense.

If your favorite team has a versatile and dynamic shooting guard there is a good chance they will be competitive in any game they play.