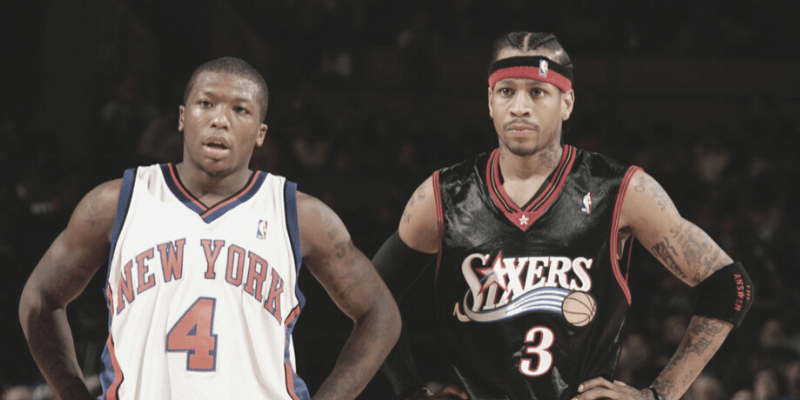 Basketball is usually a game associated with height.

Height can help you in a number of different ways on a basketball court: your defense will improve allowing for more steals and blocked shots, your offense will excel when you can shoot over your opponent, and your rebounds will increase with the ability to reach a missed shot easier.

Another part of the game that height will help is the ability to dunk the basketball.

A dunk is one of the most exciting plays in sports and can make you a fan favorite. When you think of NBA dunks your mind wanders to big tall strong players overpowering their opponents to jam the ball home.

But some of the shortest players in NBA history have surprised everyone while having the ability to dunk a basketball.

Let’s take a look at some and relive their highlights above the rim.

The Numbers Behind The Dunk

I assume everyone reading this piece knows what a dunk is already but you may not be privy to the mathematics behind dunking and how much athleticism it actually takes to throw one down.

A regulation-size basketball hoop is ten feet, or one hundred and twenty inches, tall. In 2020 it was reported that the average height of an NBA player is 6’6” tall, making the players we are going to discuss very small in relation.

So, if the hoop is 120 inches off the ground, that means a player six-feet six inches must make up 42 inches between the top of their head and the rim.

Accounting for a player’s arm length, that means they must have a vertical leap of between 25 and 32 inches in order to dunk the ball.

Now imagine a player under six feet tall, or 71 inches or less. The athleticism of the players we will cover is unbelievable even by NBA standards. Are you ready to take the leap with us?

The Shortest NBA Players to Dunk During a Game

It is fitting that Bynum has the hops he does because he has “bounced” around enough since college. He started at the University of Arizona and ended his career at Georgia Tech and then went undrafted in the league.

After a few stops, one of note in the then D-League where he was named 2006 Rookie of the Year. He caught the attention of the Detroit Pistons in 2008 and parlayed that into a fruitful 7-year career in the NBA.

Bynum also holds one of the best nicknames in sports history, being called “Bynumite” because of his explosive athletic ability. He would always find the open man and made opponents pay at the rim when he had the chance with thunderous dunks from the little guy.

This video shows some of the excitement Bynumite brought to the league during his pro career.

Lawson was highly touted out of the University of North Carolina after winning ACC Player of the Year honors and leading the Tarheels to the 2009 National Title.

While his NBA career never quite materialized in terms of individual accolades and success, he was not short on highlights.

Lawson was also dangerous from beyond the arc which led to a lot of his highlight dunks because defenders had to play him tight for fear of him hitting a three.

He also had great handle as you can see in this highlight showing off his sick dribbling and tremendous ups at the rim. He posterizes two Lakers players and shows why he was respected as an explosive undersized dunker and point guard.

The most accomplished player on this list was also a well-known dunker for his size.

Ever since college, where Iverson was a standout at Georgetown leading them to the 1996 Final Four, Iverson built a reputation as a player who loved taking the ball to the basket with reckless abandon.

Iverson’s height has always been in question as some places listed him a bit taller at six feet but no one argued his exceptional athletic ability.

Iverson is a Hall of Famer based on the stats he accumulated over his career, however, his diehard fans will tell you he is also one of the most exciting players to ever lace up his sneakers. His highlights ooze fearlessness and are filled with him dunking over players much larger than him.

While his career mainly saw him in a supporting role, Robinson could shine like a star when you gave him an open lane to the basket and he rose up for a Mighty Mouse-like slam.

At 5’9” Robinson is the only player in NBA history to win the NBA Slam Dunk Competition three times.

What makes Robinson’s highlight reel so fun is how diverse his dunks are for such a short player. Usually, when smaller players dunk, they are lucky to get the ball over the rim and the feat of them dunking is the highlight and not the way in which they do.

Robinson was an NBA journeyman that wowed crowds in every NBA city he played and had the dunks to prove it.

Webb was the originator of the little man with superhuman hops. He burst on the scene in high school as there were rumors he could dunk a basketball when he was merely 5’3”.

He wasn’t highly touted but that changed after he led Midland College to the junior college national title in 1982. He parlayed that into a chance at NC State where he made believers out of the ACC royalty.

Webb made his mark felt in the NBA where he gained a bit of national attention because of his height and vertical leap that helped him become a fan favorite.

He even won the 1986 Slam Dunk Competition in front of his hometown in Dallas, defeating fellow teammate and high-level dunker himself, Dominique Wilkins.

Spud Webb is the third shortest player in modern NBA history but that didn’t stop him from becoming a household name and supreme dunker.

This article goes to show you that size doesn’t always matter when pursuing a career in basketball.

Shorter players have to work harder or be much more gifted athletically to succeed as they can’t rest on their height like most NBA players.

That didn’t stop the shortest NBA players to dunk and was probably their biggest fuel to prove everyone wrong and leave a mark on NBA basketball forever through their incredible dunking ability.

Who is your favorite short dunker of all time, and did they make our list? Let us know in the comments!