But before we dive into the history of the revolutionary shot clock, let’s discuss what the shot clock actually is and its role in the game of basketball.

The shot clock is a tool used to control the pace of a basketball game by counting down the seconds of each possession in order to ensure that possession is changed or a shot is taken in a set amount of time.

The clock is usually placed at the top of each basketball hoop so every player on the court, and coaches and fans in the arena, are able to monitor the time on the clock in order to take a shot prior to the expiration of time on the shot clock.

A shot clock will reset in only a few instances:

If a team fails to take a shot and either hit the rim with it or make it before the shot clock expires the referee will call a “delay of game” and award the ball to the opposing team.

A History of the Shot Clock

On November 22, 1950, the Fort Wayne Pistons and the Minneapolis Lakers made history by playing in the lowest-scoring game in NBA history. There was a total of 4 points scored in the fourth quarter and the final score ended up a pathetic 19-18. After the game, league officials agreed on a need to create something that would speed up the game. The league was losing fans due to these all too common low scoring affairs and they needed to make a change before it was too late.

They tried several other ideas before resting on the creation of the shot clock in 1954. Syracuse Nationals (now the Philadelphia 76ers) owner Danny Biasone tested out a 24-second shot clock during a scrimmage. How did he come up with 24-seconds? Simple mathematics:

“I looked at the box scores from the games I enjoyed, games where they didn’t screw around and stall. I noticed each team took about 60 shots. That meant 120 shots per game. So I took 2,880 seconds (48 minutes) and divided that by 120 shots. The result was 24 seconds per shot.” – Danny Biasone, Syracuse Nationals owner

The initial reaction from the players when the shot clock was introduced for the 1954-55 NBA season was one of panic and confusion. Many players had never played with such strict time constraints and thought they had to shoot the ball almost immediately or run the risk of losing possession.

However, once the league grew used to the shot clock, they began catering their offensive sets to fit the 24-second possession guidelines. They realized it wasn’t a bad thing to use almost the whole shot clock if it meant getting the best possible shot each possession and scoring averages began skyrocketing.

The very first game in which the shot clock was implemented, the Rochester Royals defeated the Boston Celtics 98-95. It had only been four years since the lowest scoring game in NBA history and the league had seen the impact the new shot clock would have on their league. In the first full season of utilizing the shot clock, attendance grew by 40% and drew rare praise from every stakeholder involved in the new rule.

One slight modification of the shot clock has been on its reset in the middle of possessions. If the ball remains with the offensive team there are situations, notably, while the ball is in the offensive team’s end of the court after say a foul call or jump ball. In these situations, the clock is reset to 14-seconds. The shot clock has been a revolution to a league that has seen over 100 possessions on average per game.

The collegiate level, on the other hand, has seen several versions of the shot clock in the forty plus years that it has been used. The 45-second shot clock was introduced universally in college basketball for the 1985-86 season after some conferences had tested it out with some success. The NCAA was changing substantially during this time as they would introduce the three-point shot the very next year to build more excitement within their game.

After the NCAA didn’t quite see the increase in offensive performance they had hoped with the 45-second clock they lowered it to 35-seconds for the 1993-94 season. This was the case for over twenty years but was most recently changed to 30-seconds for the 2015-16 season.

The game of basketball has evolved in the past twenty years due to the increase in three-pointer shot, the near disintegration of traditional positions on the court and the advent of players using college as a temporary stepping stone towards their NBA careers making the idea of college team chemistry almost obsolete due to the revolving door of players. These factors have all contributed to the continued evolution of the shot clock in the college game.

Across the World and Other Sports

The shot clock became so popular that it was adopted among several global leagues as well including in FIBA, the league that oversees basketball internationally. Several leagues across sports other than basketball have also joined the trend. These sports are completely diverse and include lacrosse, water polo, bowling, and multiple types of billiards, to name a few.

Syracuse, NY: Home to The First Shot Clock Ever 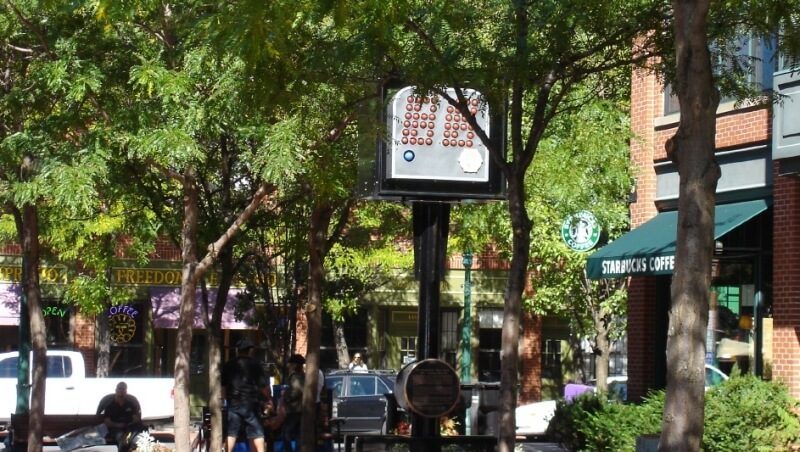 In downtown Syracuse, NY – Armory Square to be exact – sits a replica of the first-ever shot clock used. The original clock is housed just down the street at LeMoyne College and is but is smaller and only has a clock on one side of the structure. The clock works and ticks down from 24 until it hits zero and resets, a fitting tribute to the rule that began an era of higher scores and more exciting basketball. 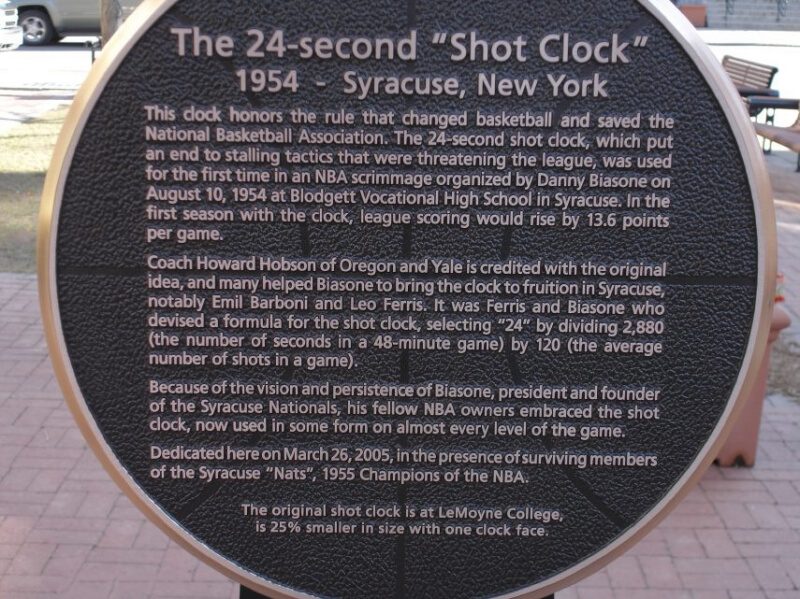 The shot clock is a symbol of the changing of a sport that is now broadcast on every continent and has even grown to be more popular than baseball, or “America’s Game.” While there are hundreds of reasons that fans and media will probably name as to why the game has risen so high in popularity, the underlying reason is right there on top of each basket in every arena across the world.

What are your thoughts on the shot clock lengths in the NBA and college game? Should they be longer or shorter in your opinion? Let us know below!