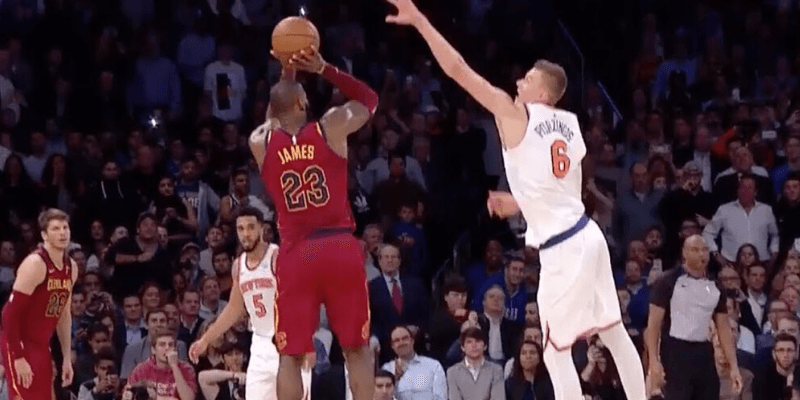 It’s clear; the beauty of life is in its diversity.

Thus, it’s normal for people to perceive and do things differently.

This principle also applies to the game of basketball! Every one of us learned about the game from different sources, even though the game is the same everywhere.

1t’s not surprising that you interpret the game differently from another person.

But, what about a case where you confuse two different positions, technique or situation in basketball, as the same—when it’s not!

A great example is a small forward and power forward—they are both wings and play almost similar positions. But they aren’t the same.

In this article, our goal is to establish a clear distinction between a small forward and a power forward in the game of basketball.

Here are four factors that distinguish a small forward from power forward:

Most power forwards has a more dominant look physically when compared to small forwards.

Also, a power forward is useful in setting an aggressive screen defense against the opposition’s guards. In general, they are domineering but slower than small forwards most times.

The physical build of small forwards makes them move faster than the power forwards—thus, they’re useful in protecting the paint with a defensive block or rebound.

They may not be the best shooters in a team, but you can’t leave them open without marking except you want to get punished by them on the court. Plus, they take more 3-pointer shots than the power forwards.

These days, we see some power forwards getting as good as small forwards when it comes to shooting—even though they aren’t better than small forwards.

Because they aren’t as fast as small forwards, the power forwards takes more shots from low-post or mid-range.

One of the striking characteristics of small forwards is their flexibility. You will see great small forwards involved in most aspects of a game. They are all-purpose players that move around the court hitting triple-doubles in points, rebounds, and assists in a game.

The power forwards are also flexible in positions. But, they are no match for the small forwards. The power forwards stick to their position, individual skills, and work towards perfection to be better in those few skills.

On the bright side, a power forward can become more successful than small forwards, because they grow and stay focused on their positions instead of becoming all-purpose players.

Power forwards are not as good as the small forwards when it comes to ball-handling. You’ll hardly see power forwards dribbling on the court, except in rare cases—where they have no choice. Instead, they are more confident passing the ball to a point-guard or penetrating a defense.

It’s a different ball game for small forwards, as they handle the ball more often than the power forwards. Thus, they do a good job playing the pick and roll or penetrating the opposition defense with dribbling moves. By doing that they create more openings in an opposition’s defense and find open teammates to pass the ball.

NBA Stars Who Are Small Forwards

LeBron Raymone James is a 6 ft. 8in player that weighs 250lbs—currently playing for the Los Angeles Lakers of the NBA. LeBron started playing as a small forward and power forward from his high school days.

Kawhi Leonard, a 6 ft. 7in Toronto raptor player plays the position of a small forward and point guard.

Giannis is a 25-year-old NBA player that plays for the Milwaukee Bucks as a small forward and guard because of his fantastic ball-handling skills.

Born on September 29, 1888, Kevin Wayne Durant is a small forward that plays for the Golden State Warriors.

You can’t mention the Oklahoma City Thunders, and not identify Clifton Anthony George. In 2010, Paul got drafted into the NBA by the Pacers. He currently plays as a small forward and occasionally a point guard in his team.

Basketball Stars Who Are Power Forwards

Kristaps is a 7 ft. 3in power forward signed with the Dallas Mavericks. He got drafted into the NBA in 2017.

After earning $5 million last season, Marcus Morris is looking to make more this season, as a power forward for Bolton Celtics.

After signing a two-year contract with Minnesota Timberwolves worth $28 million, in 2017 Taj Gibson’s performance as a power forward dipped. But, he still has a lot of value as the backup for the team.

The game of basketball has evolved to a point where we see players covering more than one position on the court. Regardless, we mustn’t confuse different positions because each of them has different functionalities.

What do you think? Are there more differences between these two positions that we didn’t list here? Or do you agree with us? You’re free to air your thoughts in the comments section below!