What is Standing Reach and How to Measure It 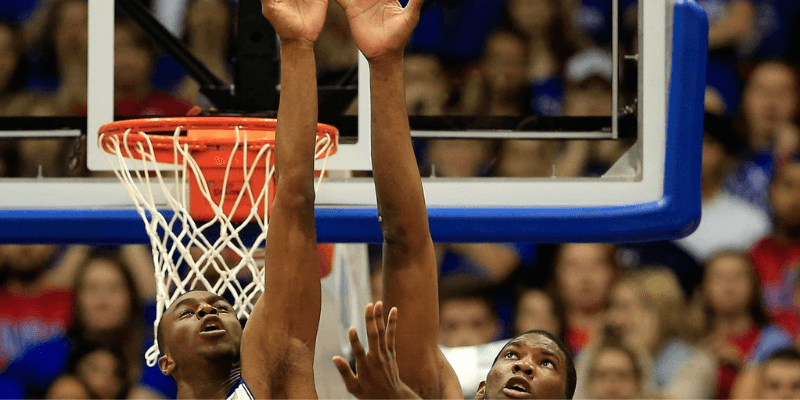 Being a tall basketball player is highly advantageous. Height can help you shoot, rebound, and defend with greater effectiveness. While height is important, another trait that may be even more crucial is length. Having long arms and legs separates you from other players. If you can jump as high as your opponent but have greater reach, you’ll have the advantage every time.

Some basketball players aren’t the most imposing figures on the court—but when you combine their talents with freakish reach, you get an absolute dynamo. Standing reach is a measurement that pro and college scouts look at when making decisions about their teams. But what exactly does standing reach mean? How is it measured? Here’s a breakdown.

What is Standing Reach?

Simply put, standing reach is the measurement of someone who reaches their arms as high as possible while standing flat-footed on the ground. The idea is to measure the length without any other athletic principles, like vertical leap or body strength. While standing reach is a priority in the scouting of players, it’s essential to state that it doesn’t guarantee a player’s success on the court. It is, however, a tangible feature that teams seek out for obvious reasons.

Why is Standing Reach so Important?

Many stat nerds and basketball diehards hold a players’ standing reach measurement to a higher standard than their wingspan. Some even think standing reach should be a higher priority to teams than a player’s height. But, when you hear their arguments—that wingspan is arbitrary, and players’ height doesn’t always translate to success—you begin to wonder if they’re on to something.

As an undersized former basketball player, I can’t tell you how envious I am of players with an impressive standing reach. There are several key situations during a game where a player with a greater standing reach measurement has the advantage. Let’s take a closer look at some of them.

Rajon Rondo is notorious for being a defensive pest for over a decade in the NBA. A large part of that revolves around his freakishly long arms for his size. He only stands 6’1” tall but carries a wingspan of 6’9”! On top of that, he has huge hands for his build. He can get inside a player on defense for a steal, or he can deflect passes, which could lead to a turnover.

Check out this video between the 0:19-0:36 second mark. In the first play, Rondo is kind of beaten off of the pick-and-roll but stays with it and gets a fingertip on the bounce pass thrown by the other team, leading to a steal. The second play sees Rondo pick the ball handler’s pocket clean, which leads to a fast-break layup by LeBron James. Both plays show the value of Rondo’s standing reach measurements.

Standing reach is far from the only factor in a player grabbing a rebound or not. But suppose two players are similar in their desire to get the rebound and their vertical leaping abilities. In that case, the athlete who wins the standing reach will beat their opponent out every time for the board.

This Celtics play by big man Tacko Fall (more on him later) shows you the difference between height and standing reach. In the video, Fall easily reaches over Wizards’ seven-footer Davis Bertans to keep the ball alive and eventually ends up with the easy dunk.

Blocks are similar to rebounds in that it takes a lot of hustle, coordination, and athleticism to excel at them. However, if you match your opponent in those categories, but your standing reach wins, then you will come out on top.

Until recently, Utah Jazz Center Rudy Gobert owned the NBA record for the biggest standing reach measurement. It is no surprise then that he has been named All-Defense four times and averages over two blocks per game over his career. Just look at these defensive highlights of his. He doesn’t blow the competition away with how high he jumps, but his standing reach is definitely present in the video.

How Do You Measure Standing Reach?

If you are an aspiring hooper, and the highlights of these physical freaks have piqued your interest in what your standing reach is, it’s simple to measure.

The measurement you come up with is your standing reach. It gives perspective on how high you can reach. It’s also the first step in measuring your vertical leap, another crucial measurement for aspiring players.

While Fall’s measurement is impressive, it isn’t the record in NBA history. That’s held by former NBA journeyman and mythic figure Manute Bol. Manute Bol was the early prototype for where the league was headed. As a 7’7” Center, Bol wasn’t afraid to shoot three-pointers, which foreshadowed where the league is today. His standing reach clocked in at an inconceivable 10’5” and helped him become one of the most feared shot-blockers during his 13-year career.

Below are some other standing reach leaders from the NBA’s database. A quick note, and the reason you won’t see Manute Bol’s name on this list, is because the NBA has only kept track of the stat in their system since 2000.

Standing reach can make a huge difference during a game. It could mean that you get the rebound over your opponent or that you can get a fingertip on a pass instead of your opponent catching the ball for a basket. Basketball truly is a game of inches. You can add the standing reach measurements of your favorite players to the long list of why one inch can literally deem your season a success or failure.

Have you ever measured your standing reach? How important do you feel it is to your own personal success on the court? Let us know below in the comments section!