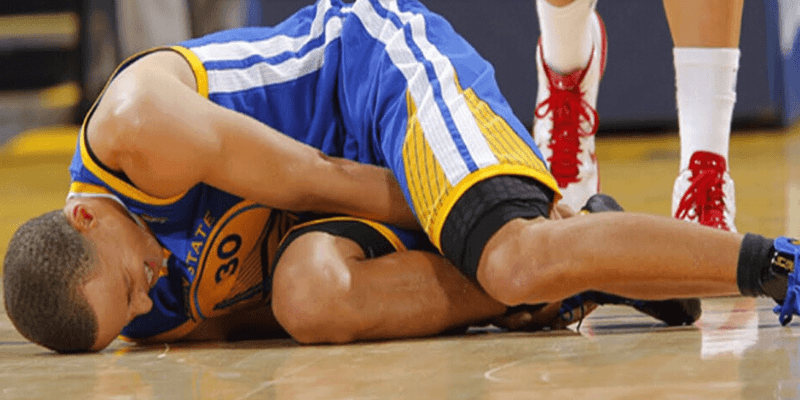 Since entering the NBA in 2009 Stephen Curry’s accolades are abundant. The son of former NBA player Dell Curry, Stephen was the 7th overall pick in the 2009 NBA Draft. He is a 6-time all-star, has won 2 MVP awards and is a 3-time NBA champion. He is also widely considered the best pure shooter to ever play in the NBA.

It is evident that Stephen Curry has achieved elite status and is one of the NBA’s all-time greats. His achievements speak for themselves, but believe it or not, there was a time when Curry’s basketball future was in extreme jeopardy.

Curry’s multiple recurring ankle injuries not only put his own career in doubt but very well could have changed the future of the entire NBA.

Ankle injuries are usually a very recoverable injury, but after you have had a couple of them, it always weighs heavy on your mind while you are playing. When is it going to happen again? How bad will it be? You try to get it out of your mind but as soon as you feel the slightest weakness or feel your ankle roll just slightly, it is back again.

In basketball, your ankles are important in so many ways. It is physically difficult to play when you have ankle problems but the mental component is also very difficult. Even when you physically heal from an ankle injury, your brain may not have the confidence to return fully due to a fear of re-injuring the ankle.

As someone who has suffered ankle injuries, and even broken an ankle, I can attest to how physically and mentally debilitating they are.

Curry’s ankle issues have been well documented throughout his NBA career. Let’s take a look at a timeline of Curry’s ankle injuries.

Things looked optimistic for Steph as experienced a healthy rookie season, appearing in 80 games. It was his second season when problems began to arise. He first hurt his ankle in preseason and then multiple times during the regular season.

One of the injuries seemed like a fluke. He was simply dribbling the ball in a game against the Spurs and suddenly rolled his ankle. He ended up injuring that same ankle multiple times and needed to have surgery at the end of the season to repair torn ligaments.

After rehab from his offseason surgery, Curry returned in the lockout-shortened season. He again injured his ankle multiple times and played in only 26 games. As the injuries piled up, there were rumors of him being traded to Milwaukee Bucks, but the Warriors decided to gamble, keeping Curry, and trading Monta Ellis instead.

Curry eventually had to end his season and got a second ankle surgery in which they cleaned out some loose debris and scar tissue from the ankle. He was beginning to feel like he was continually in rehab and he was concerned his basketball career might be over.

Others were beginning to worry also. Making comments such as, “he has glass ankles” or “he is Grant Hill 2.0”. The Warriors organization would soon have a decision to make as Curry’s rookie contract was about to expire.

Steph survived the 2012 rehab and entered the next season on a high, signing a new contract extension with the Warriors. He was also feeling good that his most recent surgery showed no structural damage to his ankle and had been a somewhat simple procedure.

Although things seemed to be getting better, the ankle injuries continued and Steph had at least 3 minor incidents that season but was still able to play in 78 games.

In the summer of 2013, the Warriors hired Keke Lyles as the Director or Performance. The addition of Lyles to the training staff would be a turning point in Curry’s career. Lyles had been watching Curry from afar and saw the issues that he was having. Lyles had a plan that would not only keep Curry on the court but it also made him an extremely hard worker and propelled him to the level of play we see from him today.

The new training regimen focused on strength training. It would strengthen his hips and core muscles and take the stress off of his ankles. Physically the training was a success and it gave him the athletic ability to do things he was not doing before.

Mentally it gave him the ability to drive the lane or make quick moves without always worrying about when his next ankle injury was going to take place. Probably the greatest benefit was that
he learned how to properly train and put in the hard work needed to make it through an NBA season.

For about 3 years, Curry was on top of the world. He won his first MVP award and helped the Warriors bring home their first NBA title since 1975. Steph made it through the regular season without any major issues but in the 2016 playoffs, he sprained his ankle in game 1 of round 1 against the Houston Rockets. He would miss games 2 and 3 but would be back to help the Warriors make it back to the finals.

This season would see the return of multiple ankle issues. The Warriors would go on to win the second of back-to-back titles, but Curry only appeared in 51 regular-season games that season.

Steph had a few minor tweaks to his ankles but nothing serious. This included an ankle tweak in Game 6 of a playoff game against the Clippers, but he quickly returned to the game and had no problems after that. He also had some other nagging injuries that season which kept him out of games but for the most part, his ankles held up.

You can find more details and even some video footage of Steph Curry’s ankle injuries at Fox Sports. If you want to see an example of how Steph trains, check out this montage of some of his workouts.

Ankle injuries have been a part of Stephen Curry’s career since he entered the NBA in 2009. His early ankle issues required surgery, but his intense training regiment, designed to increase strength and take the stress off of his ankles has helped him avoid the type of season-ending injuries he suffered early in his career.

While his early injuries were a real threat to his basketball career, they have in turn helped him to win multiple MVP awards and NBA Championships. The rehab, and training to prevent more injuries taught him the work ethic that he needed to become the future hall of fame player that he is today.

Do you think Stephen Curry will continue to have injury problems? We’d love to hear from you, so please leave your comments if you would like.

It is obvious, the 180 degree radius roll design of the edge of the Curry sole makes it impossible to recover from an errant step, an ankle roll will happen every time. It happened to Chucky Hepburn in March Madneas ’22, friction catches the edge of the radius sole and the ankle is twisted immediately, no recovery possible. Basketball shoes need a flat beveled edge to force the sole of the foot into contact with the floor.