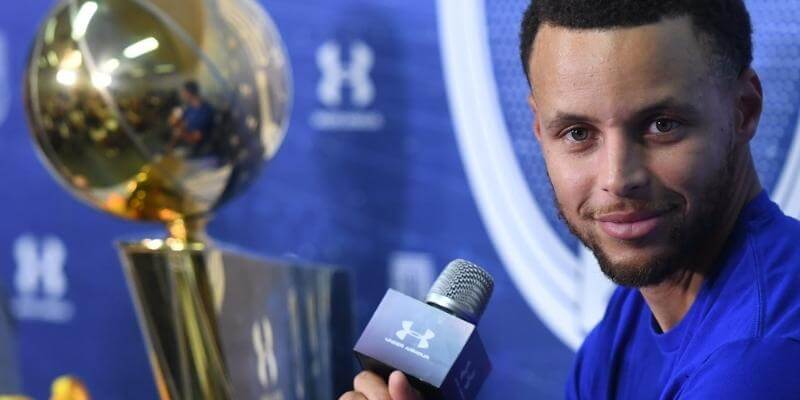 Steph Curry burst onto the NBA scene in 2009, as one of the most exciting rookies in the league. Since his first season, Curry has revolutionize the game in many ways and has truly become a superstar both on and off the court.

With that stardom has come much more exposure than he was used to coming into the league. Unlike players like LeBron, who was dubbed the “Chosen One” as a high school junior, Curry had to earn his notoriety.

This type of slow burn gave Curry a different perspective than many of his counterparts and it shows in the way he handles himself, and the type of quotes he gives during interviews.

This article will focus on some of Steph’s best quotes and give some context on where his head was at the time.

Curry is known for some insane workout sessions. In fact, his trainer recently shared how precise Curry is when he practices shooting: anything that hits the rim is essentially a miss in Curry’s mind.

The next time you watch a basketball game, count how many times a shot hits the rim before it goes in. You will probably lose count, which just goes to show you the type of perfection Steph wants in his game.

This story about Steph’s workouts shows the type of player he is. He is always trying to get better and become the best. Because, as he says in the quote, “good enough isn’t good enough.”

Let’s take a look at the whole quote to get an idea of how Curry approaches the game of basketball, but also the game of life.

“You have to challenge yourself to get better. Good enough isn’t ‘good enough’”

As someone who played the underdog for most of his basketball career, Steph can attest to the type of work it takes to be the best at something. Many young fans reading this may only know MVP-caliber Steph.

Remember though, Steph wasn’t heavily recruited out of high school, played college ball at Davidson, and wasn’t a lock to be a star when he was drafted in 2009 by the Warriors. Hard work has paid off for Steph Curry.

2. “Success is not an accident, success is actually a choice.”

This quote was actually said about Steph, but segues nicely from the last quote we covered. In this video, the trainer talks about a Kobe Bryant skills camp that the top talent attended.

This was before Curry was a household name, but the type of workout that Steph put himself through showed what type of player he aimed to be.

The narrator talks about how the camp would hold two workouts a day for three days. Before the other campers were even ready to step on the court, however, Steph was already breaking a sweat, getting up game-level shots.

He would then participate in the workout but wouldn’t leave the court until after he swished five straight free throws. This was after three hours of basketball, but it didn’t matter.

This type of dedication shows you how an undersized player like Curry has become the type of star that he is. While he was fortunate enough to have a father who played pro ball, he wasn’t graced with a 6’8” frame. Curry’s biggest asset is his work ethic.

3. “If you don’t fall, how are you going to know what getting up is like?”

So many people are afraid of failure these days, especially with the advent of the internet. If an athlete makes a big mistake or misses a game-winning shot, it is shown over and over again. If they have an embarrassing moment under the big lights they could even become “meme-worthy”, something that no one wishes.

But it is those players that stick their necks out and risk failure that are rewarded with greatness. Steph Curry knows that failure is the best teacher. He knows that if you have never gotten knocked down then getting up may be difficult. But, if you have been knocked down and have mastered getting up, you will never worry about a “big moment” again.

Curry’s Warriors teams have won three NBA Titles and have played in the Finals five times. He has seemingly lived on the big stage for the past seven NBA seasons which opens the door for a lot of scrutinies. The pressure and risk of failure, however, is what has made him the strong, and confident competitor that he is.

Another big reason for the confidence that Steph carries himself with is his relationship with Jesus Christ. Curry and his family are very religious, and he doesn’t hide that aspect of himself. Curry has even put his money where his mouth is, partnering with SONY Pictures on faith-based, family-friendly content for the company.

Steph also regularly posts Bible verses on his Twitter account and is a devoted husband and father, something that often goes unnoticed in today’s fast-paced internet-dominated world.

Let’s take a look at the above quote in its entirety:

“There’s more to me than just this jersey I wear, and that’s Christ living inside of me.”

While this speaks to Curry specifically, the idea that professional athletes are idolized because of what they do on the court alone isn’t new. Worshipping an athlete that you don’t know personally can set you up for unpleasant truths, and Curry is aware of this.

This quote is saying:

Steph Curry is a thoughtful athlete who has a diverse set of life experiences behind the quotes we covered today. He is the son of an NBA player which most would think only helps your chances at following in their footsteps. But Curry had an uphill battle, one that he faced with class, hard work, and the strength of the Lord behind him.

He knew he had to work hard to get to where he is, and has never taken any of his success for granted. These quotes are a glimpse into the mind of Steph Curry and portray an MVP-caliber person as well as an All-Star athlete.

What is your favorite Steph Curry quote? Let us know below in the comments!