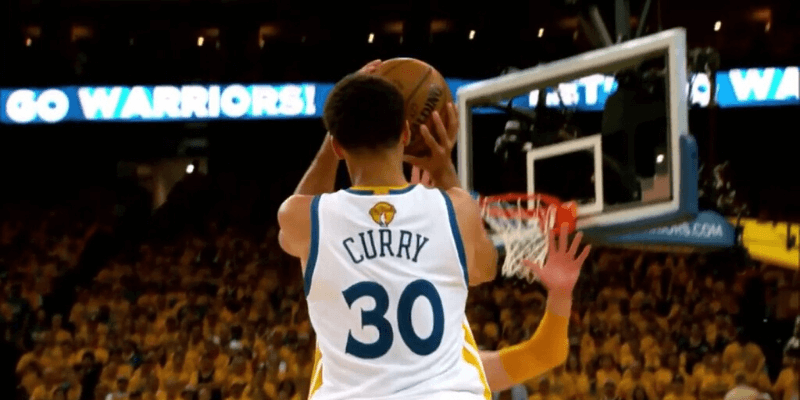 Curry is one of the greatest shooters of all time. Let’s face it, only two players in the history of the NBA were as accurate as Curry: Hubert Davis and Steve Kerr.

In the 2015-2016 season, Curry set a new record by making 402 successful 3-pointers. Even though Steph Curry isn’t as athletic as Kevin Durant and Lebron James, his shooting skills have revolutionized basketball.

By the age of 11, Stephen Curry was competing with his father and other NBA players in HORSE.

Dell Curry, Steph’s father, confessed that he once left a game earlier than expected when Curry was in eighth grade because he had scored many points against his opponents, and he felt so bad for the other team.

Ever wondered how Steph Curry shoots a basketball so well? Let’s take a closer look at his shooting form.

Steph doesn’t always keep his elbow, hips, and shoulder aligned to the basket when shooting, but when he gets an open shot with the ability to square up completely, he can be deadly. He tilts his forearm just a little bit to position the ball above his shooting eye and is able to get his shot off before his opponents can react.

After receiving a pass, Curry moves the ball down to his waist to attain enough momentum and power to shoot it. He then moves it to a height, which is just above his head, jumps and gives it a powerful release. Most shooting experts would argue that his release point is too low but it works for Curry due to his vast offensive moves.

Curry does not stop or hitch when taking a shot, he releases the ball in a single continuous motion. Close-range, one-motion shots, can be problematic to throw because they can be blocked easily. Such shots are suited for long-range shooters like Steph Curry who can release the ball quickly.

Step 1: Focus Your Attention On The Rim

Curry mentioned that rim hooks always guide him when he is aiming for a shot. To master this skill you have to:

Step 2: Practice on Positioning Your Lower Body And Legs Correctly

The position of your legs and lower body plays a crucial role in determining the accuracy of a shot. Follow these simple steps to position yourself correctly for a shot.

Good hand positioning will help you in controlling the ball more effectively.

Practice every day to improve your muscle memory. This makes you more comfortable when you are shooting. Curry participates in yoga sessions to improve his balance and muscle memory. Going to the gym, jogging, and skipping are exercises that will help you in improving your muscle memory skills. If you follow the listed steps, you will notice some improvement in your shooting form.

Which basketball player have you fashioned your shot after? Let us know in the comment section below!