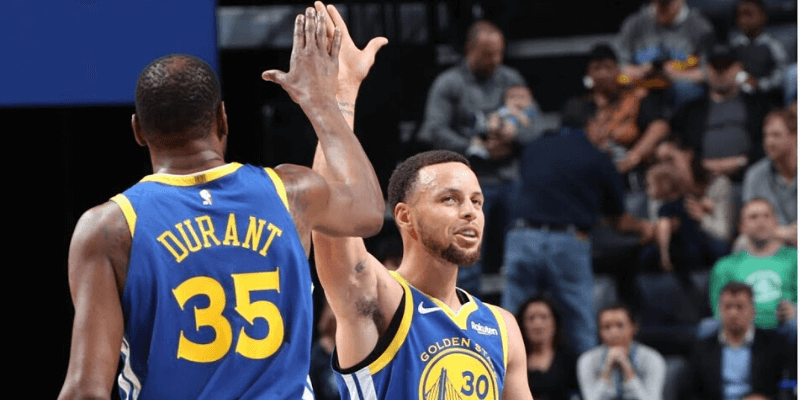 If you are a big-time basketball fan or player, you’ve probably had this heated discussion with your friends and didn’t come to a conclusion. Between Steph Curry and Kevin Durant who’s better? Both players have played side-by-side, making it harder to determine who’s better than the other. Durant and Steph Curry were teammates when Durant still played for the Golden State Warriors team, however, Durant was later signed with The Brooklyn Nets.

It came to a point where Steph Curry was more popular than Kevin Durant. After the 2015-2016 season, Curry was often compared to Lebron James, especially after winning the MVP. However, when comparing Curry to Durant, you have to take a look at their gameplay and what they have achieved since they joined the NBA. We are going to take a look at the statistics that rank these two players in the NBA.

Kevin Durant joined the NBA in 2007 after getting drafted to Seattle Supersonics. In 2008, the team changed its name to Oklahoma City Thunders, and Kevin Durant played for that team for 8 years before getting signed with the Golden State Warriors in 2016. His team-change stirred animosity amongst OCT fans because they thought that Durant would stick with that team.

Known for his shooting skills, Stephen Curry joined the NBA in 2009, he was the 7th pick in the first round picks. Since then, Curry has always played for Golden State Warriors and his supporters hold him in high regard for sticking with one team since he was drafted to the NBA. Even though you can argue that Curry is more loyal to a team than Durant, that wouldn’t be substantial enough. Basketball comparison is more about the gameplay than the personality of the player.

Not to mention, Steph Curry has more chemistry with other players, when Durant is off the court and Curry is on the court, the average points increase by 12.1 in every 48 minutes.

Comparatively, when Durant is on the court and Curry is off the court, the points increase by 1.3 points every 48 minutes. With Curry on the court, other players feel freer. As you can see, their gameplay and interaction are totally different.

If you take a look at their careers at the moment, Steph Curry has been ranked amongst the top ten most phenomenal PGs, while Durant has been ranked amongst the greatest SFs of all time. When you take a look at the number of MVP awards each possesses, you’ll notice that Curry has 2 MVPs, whereas Durant has been awarded 1 MVP. Curry has spent less time in the league yet he has won more MVP awards.

All that leaves you wondering, between the two players, who has more points per game? Who has more championship-wins? In playoffs, who averaged more points than the other? To get more clarity on the matter, let’s dive deeper into statistics and numbers.

23.5 is the average points scored by Steph Curry per game. On average, Curry has 4.5 rebounds per game, while his assist rate averages at 6.6 per game. Of all the steals that Golden State players manage to pull in a single basketball game, 2.2 are from Steph Curry. Even though his gameplay is more focused on the offensive side, his defense is still good.

Durant has been in the NBA for a longer time than Steph curry. Most of his numbers are higher than Curry’s. For starters, Durant has played in the NBA for 12 seasons. In those 12 seasons, he has managed to win 2 championships, and that was after joining the Golden State Warriors. He has played in 9 different playoffs, and 10 all-star games. On top of that, Durant has been voted to the All-NBA first team 6 times. He was also a steals leader due to his defensive gameplay.

Based on the statistics of the two players, the individual attributes of both are high, but there’s a slight difference in some skills. Steph Curry is good at giving assists than Kevin Durant because he’s favored by his position. Curry has also led his team, Golden State Warriors, to two championships. Durant has higher rebounds, average points per game and more league-experience. Curry was recognized as a scoring leader, whereas Durant was recognized as a steals leader.

If you compare the two right now, Steph Curry might be doing much better, but if you do a comparison from the time the two started playing in the NBA, Durant comes out as the more experienced player. His stats are high and he has been in the NBA for a longer time than Steph Curry. Clearly, the more time you spend in the NBA, the higher the chances of a performance-increase.

When it comes to popularity, Steph Curry is slightly more popular than Kevin Durant. He is the perfect pick for an endorsement, so if you have anything related to basketball that you want to launch, give Steph Curry a call.

Both Steph Curry and Kevin Durant are top-notch players. Curry is good at shooting, while Durant is good at layups, rebounds, and defense. They have played together, and they took the Golden State Warriors to the next level. Of course, they have unique skills that set them apart.

Curry is doing good at the moment, but Durant is more experienced and a great SF.

If you have any other thoughts about this topic, let us know in the comment section below.