How Many Rings Does Stephen Curry Have? 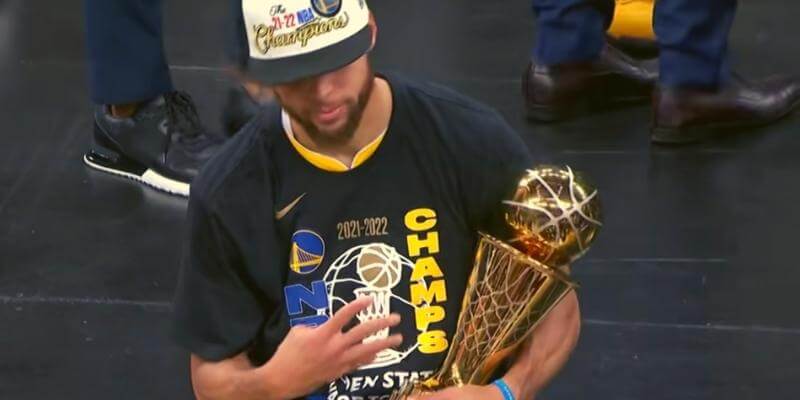 Stephen Curry is not only one of the most exciting NBA basketball players, but he, along with his Golden State Warriors, is one of the winningest NBA players in the history of the league.

He has played one of the most important roles on a Warriors team that has been hailed as one of the greatest teams in NBA history. But exactly how many rings does Stephen Curry have?

This article will take a trip down memory lane as we recap each season that Curry won a ring. Let’s get started with some background on his team’s overwhelming success in the past half-decade!

Before we discuss the amount of success Curry has had as an individual player, it’s important to measure the success of his Warriors team to show how truly special their run together has been.

In 2014 the Golden State Warriors were seen as an up and coming team with big things ahead of them if they could hit the next level of NBA success. They had just won 51 games in the 2013-14 season but fell to the Los Angeles Clippers in the first round of the NBA playoffs.

After the season, the Warriors made a somewhat controversial move letting their coach, Mark Jackson, go even though he had been the leader behind the turnaround project in Golden State. To add to that controversy, they hired Steve Kerr, a well-respected figure around the league and five-time NBA champion as a player, who had never coached an NBA game.

That controversial decision was short-lived as the Warriors won 67 games in 2014-15, won the Western Conference and became NBA champions in just the first year under Kerr’s direction. Mark Jackson found a soft landing spot calling games for ESPN but you always wonder if he daydreams about what might have been had he kept the job as head coach.

Since the 2014-15 season, however, the Warriors are the leagues’ winningest franchise, averaging 64 wins per game over the past five seasons. This leads to the rings, of which there have been many, for the Warriors, and their superstar Stephen Curry.

The Golden State Warriors rolled into the playoffs as the Western Conference’s 1-seed, after winning a league-best 67 games during the regular season. They handily swept the New Orleans Pelicans in round one, with Curry averaging over 30 points per game for the series.

Round 2 was a definite test to their team pedigree as they faced off against a gritty veteran team in the Memphis Grizzlies. After three games, the Warriors found themselves down two games to one but behind a 33 point game by Curry in Game 4, tied the series. The Warriors won the next two games paving their way to the Western Conference Finals.

Curry led the way again in the Conference Finals against the Houston Rockets. The Warriors never really felt a true threat from the Rockets and ended up winning in five games to set up a matchup with the Cleveland Cavaliers, led by arguably the greatest player in the game, LeBron James.

The first two games of the NBA Finals went to overtime with both teams winning one apiece. The Cavaliers actually went up two games to one on the Warriors before Golden State regained their composure and won three straight to secure their first NBA championship since 1975 and, more importantly, Steph Curry’s first ever career title. There would be more to come.

A lot had changed since the Warriors won their title in 2015. Superstar Kevin Durant decided to join the fun in Golden State and controversially joined the team in the summer of 2016. The Warriors won 67 games that year and burst into the playoffs with the best record in the league.

The Finals pitted the Warriors and Cavaliers against each other for the third straight year. The matchup had begun to feel like a modern-day rivalry with the Warriors winning in 2015 and the Cavaliers getting them back in 2016 with the upset in the Finals.

While the previous year’s series went seven games, the addition of Kevin Durant to the team proved too much for the overmatched Cavs. The Warriors won in five games and Kevin Durant won Finals MVP.

Golden State had another impressive season, however, a little bit of the magic had seemed to wear off due to all of the wear and tear of the past four seasons. They still won 58 games but finished the season in second place in the West behind the Rockets. Curry’s regular season was considered a disappointment for his standards. He still averaged 26 points per game but only played 51 games that year due to injury.

They didn’t get much push back early in the playoffs as they handled San Antonio four games to one in the first round. It was the same story with the New Orleans Pelicans in round two. The Pelicans were led by all-world athlete and Power Forward Anthony Davis, but Davis’ firepower was no match for what the Warriors could throw at him on both the defensive and offensive end of the floor.

Their biggest test came in the Western Conference Finals when the Rockets pushed them to the brink almost capturing the series in seven games. Golden State ended up down three games to two and had to win two straight elimination games against the Rockets to advance. The Warriors trailed by seventeen points in the first quarter of Game 6 and also had to come back in Game 7 to pull off a pivotal series comeback.

They then met the Cavaliers for the fourth straight for the NBA championship. The real test, though, was met during the Western Conference Finals when the Warriors beat the Rockets. The Cavs again proved no match for the Warriors in the Finals. LeBron James had a masterful series but seemed to be the only player on the Cavaliers worthy of playing in these Finals.

Curry had a very strong showing the first two games of the series, scoring 29 points in Game 1 and 33 in Game 2. He looked to be on the way to securing his first ever Finals MVP award when he went ice cold in Game 3 while Durant scorched the Cavs for 43 points. Curry bounced back in Game 4 with 37 but Durant recorded a triple-double and went on to win his second consecutive Finals MVP award.

At the end of the day, though, Stephen Curry had won his third NBA championship, placing him in the lofty company among NBA superstars. Very few can even claim one title to their credit and Steph Curry had just won his third in only his ninth NBA season. A bettor’s man would be smart to wager that he wins at least one more title in his career due to his amazing, clutch play and the Warriors winning mentality and accomplished front office. A championship, however, has eluded many an NBA superstar, and you never know how the ball will bounce.

Stephen Curry just led the Warriors and won his 4th championship and 1st Final MVP after beating the Boston Celtics by 4:2.

Do you have a favorite year the Warriors, and Steph Curry, won the title? Leave us a comment below!