What Race is Stephen Curry? 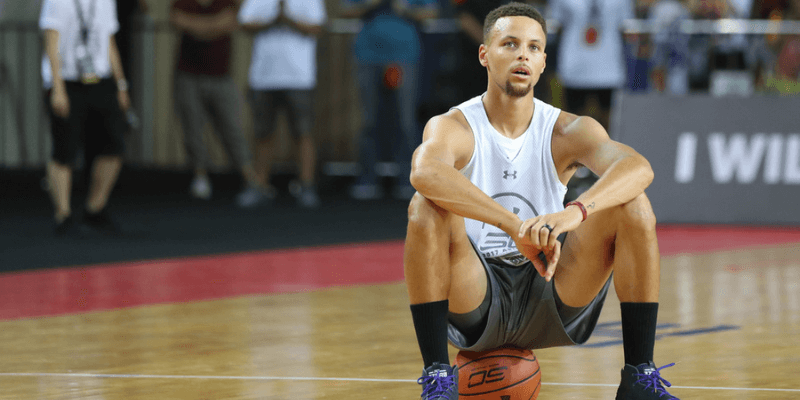 Since he burst onto the national scene back in 2009 leading Davidson’s Cindarella March Madness run, Stephen Curry has had the attention of both die-hard and casual basketball fans.

He has continued his meteoric rise since college, getting drafted by the Golden State Warriors in 2009 and becoming one of the greatest shooters in NBA History.

He has won two MVPs – becoming the first unanimous winner in 2016 – and been crowned NBA champion three times since entering the league. Curry is a star in every sense of the word.

One aspect of Curry’s personal life that has always been on people’s minds due to his more exotic look – the green eyes and light skin – is his race and ethnic background.

While race should have no bearing on a person’s individual worth, or in Curry’s case, how well he can play basketball or what type of a man he is, it is a question that comes up. So we are here to answer it once and for all.

But, in order to dig deeper and understand exactly what his heritage is, you must take a look at both his mother and father’s ethnic backgrounds as well. Both have their own backgrounds and their paths crossed in college, leading to a life filled with kids and grandkids.

It is a beautiful thing when two people have kids. The children each get pieces of their parents’ backgrounds and create a unique, individual person that also ties generations of history together into a new being.

Researching Curry’s parents’ backgrounds gives you a glimpse of who Curry, and his siblings Seth and Sydel are and where they came from.

Dell Curry had a long and successful career in the NBA and is hailed as one of the best shooters in league history.

Dell Curry was a standout at Virginia Tech during the 80s and continued his playing career becoming an NBA marksman for 16 years. His sons are seen in the same way, although both have great first steps with the ball and can knock down shots from anywhere over half court.

There are several stories about how much time the Curry children spent at the different NBA facilities watching their father practice and play his games.

Curry talks about sneaking away from home games, when his father played for Toronto at the end of his career, to go shoot and run drills on the practice court with his brother and other players’ kids. As for his ethnicity, Dell is of African American descent.

While Steph’s father gets most of the attention due to his NBA connection, Curry’s mother, Sonya, who grew up in Virginia, was a standout athlete in her own right.

Sonya’s ethnic background is African American Creole and Haitian. While there isn’t much online about her racial makeup, there is a lot about her achievements, which are quite impressive.

You may think the curiosity about Curry’s race comes mainly from basketball fans or ignorant people who can’t see past Curry’s complexion and features. The topic, however, has come up in NBA players circles on a number of occasions in the past.

In 2017, Draymond Green discussed his, and other players’ perception of Curry as a soft player, and skin color is one feature that came into question. Green said that players see Curry’s wealthy upbringing, family with two parents, and yes his light complexion, and immediately judge him as soft or privileged.

Green went on to defend Curry’s toughness but it was telling that the conversation of color was tied to a notion about someone, whether positive or negative.

In 2014, on an NBA 2K panel along with Curry, James Harden, and Anthony Davis, Kevin Durant shared a story of the first time he began taking notice of Steph and race played a big part in his first impression of him.

The story then moved to how skilled a basketball player Curry was at a young age, but commenting on his skin color was Durant’s first instinct.

On the topic of skin color and toughness, several light-skinned players have had the same “soft” stigma placed on them because they weren’t “black enough.”

Jordan Clarkson, formerly of the Los Angeles Lakers once recalled how Kobe Bryant used to tell him to stop “going to the hole like a light-skinned dude” and to “start doing it like a dark-skinned dude.” The topic of race is all over the place and these stories show that the NBA isn’t immune to it.

The question of race and identity has played a big part in Steph’s wife’s life as she has said she feels “too black for the white community and not black enough for my own community.” Curry’s background is very diverse.

Her mother is Jamaican and Chinese, and her father is Polish and African American. While growing up in Canada Ayesha said she could always identify with her Canadian nationality but once she moved to the States she was labeled as “black.”

Stephen Curry is one of the best players in the league right now and will probably go down as one of the top 5 shooters ever. His resume is full of basketball accomplishments and his character off the court is untouchable.

He is a classy, religious person with a loving wife, beautiful kids, and a supportive family around him. All of this to say that, while his race or ethnicity is completely irrelevant, the question does arise from time to time.

Typically, it is out of genuine curiosity, or the fact that, while race isn’t a big deal for the majority of people that watch basketball, the color of someone’s skin is a quick way to describe and identify them in one’s brain.

I hope this article cleared up any questions about Curry’s race and that you have a deeper understanding of his background through the background of his parents and their lineage.

Does race or ethnicity matter to you when watching a game? Let us know your thoughts below!