What Are Stephen Curry’s Signature Moves 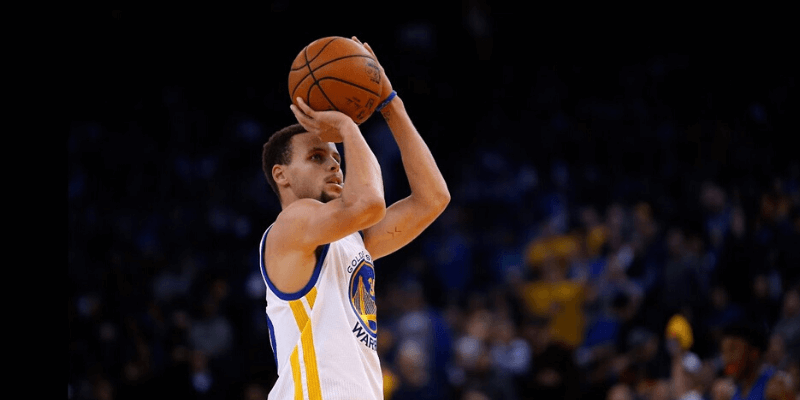 As one of the most exciting basketball players in the world right now, Stephen Curry has a large bag of tricks to choose from when it comes to scoring the basketball. Curry’s Golden State Warriors are the NBA’s modern day dynasty and one of the best offensive teams in the league on a consistent basis.

What continues to boggle the minds of fans and media members alike is just how effective Stephen Curry, and his Warriors teams, are in the art of offense. The Warriors style of play is fast-paced, wide open, and relies heavily on three principles: passing, ball movement, and the three pointer.

Luckily for Curry, this style of play lends perfectly to what makes him great on the basketball court. Due to his lack of size and height, Stephen Curry has never been able to rely on getting the ball and overpowering them on his way to the basket. He also can’t shoot over most of the players in the league who defend him, so he has had to lean on a more motion-centric, fluid style of play that gets him open off of ball cuts, screens, and signature moves on the offensive end.

But what, specifically, are Stephen Curry’s signature moves? Let’s dissect some of his best and most exciting moves.

As we mentioned earlier, Steph Curry is smaller than most of his peers in the NBA, which makes it a bit more challenging for him to get his shot off.

He doesn’t have the luxury of Kevin Durant or Dirk Nowitzki who can take, and make, shots simply because they are taller than their defender. While this lack of size could be seen as an obstacle, it has given him a plethora of tools in order for him to get an open three point shot. Let’s take a look at some variations of the three pointer that Steph has become great at.

When Curry burst onto the scene as an NBA superstar during his first MVP season in 2014-15, his step-back three pointer was one of his biggest weapons. It seemed like every hooper in the gym and on the playgrounds were practicing their own version of the Curry step back after that season.

The key to a step-back three pointer is to get as much separation from your defender as possible so that you can get an open shot off. Curry has mastered this move and a lot of his effectiveness is due in large part to his amazing ball-handling skills.

Steph usually starts the move by dribbling towards his defender, assessing the situation. He then uses a set-up dribble to explode in one direction and while his defender goes that way, Curry plants his foot hard and uses that foot to step, or jump, in the other direction. If done right, Steph is shooting his shot while the defender is still recovering from the first move he put on them to fake them out.

Off the Ball Screen

The keys to one of Curry’s unstoppable off the ball screen three pointers relies on two things: the screener setting a good pick, and Curry setting up his defenders to get hit by the screen. I could wax poetic for hours about the art of an effective ball screen but the most important thing for the player with the ball is not to rush the screen and make sure you give your screener a chance to hit the defender with it.

Curry is a master of both which allows him to get open almost at-will for a signature ball screen three pointer. Once his defender is hit by the screen or off-balance because of it, Curry can square his feet and line his shot up, which is usually wide-open.

Possibly Curry’s most dangerous version of the three pointer is his pull-up. This is when Curry comes down the court and suddenly sets his feet and shoots a three pointer before the defense, and sometimes even his own team, gets set up.

The biggest reason that this shot is so unstoppable is that Curry’s range begins when he enters the gym! Curry has pulled up from so far behind the three point arc that his defender is forced to pick him up well earlier than other players. And because of Curry’s unbelievable ball-handling skills and quickness, the pull up three is almost unstoppable because even the best defenders aren’t always ready to defend it.

2. Behind The Back (Push Dribble)

Speaking of Curry’s unbelievable handle, his behind the back move accompanied with one of the best “push dribbles” in the league, has been fooling defenders since his first day in the league. A push dribble is when you both push off of one foot while making a move thus pushing the ball out in front of you to create more separation than normal.

Curry’s behind the back dribble is different from other players because of the dribbles that set up the move beforehand. Because Curry can break defenders down so easily, his set up moves are almost as effective as his signature moves. For the behind the back move, Curry sets it up first with a misdirection dribble, either through his legs, a crossover, or in-and-out dribble.

After that dribble, if the defender isn’t already off-balanced, Curry hits him with the behind the back push dribble that creates the separation between him and the defense.

We have spoken at length about Steph Curry’s ball-handling skills and ability to get past his defenders. But what does he do once he gets into the lane in the land of big men?

Because of his lack of size, Curry has to figure out a way to get the ball over the big man’s outstretched arms and he utilizes a floater, which is a shot or layup that is shot abnormally higher than most shots. Oftentimes Curry’s floaters are taken in the paint, about five to eight feet from the basket. This is because he needs to get them off before the forward or center meets him in the lane and has a better chance of blocking his shot.

The floater is a difficult shot for many reasons. One, it is not a normal shot because of how high Curry has to shoot it in the air. It is essentially a rainbow shot over a defender that is in your face which means your vision of the hoop is blocked as well. To get into the lane, make the split decision on the shot selection, and then gauge how far away from the basket you are is nearly impossible. You can practice floaters all you want, but until you are playing in a game and have to adjust to the defense, you just can’t anticipate what is necessary for each situation.

These signature moves are some of the ways Stephen Curry is able to excel in the NBA when his size and strength may not measure up to the rest of his peers. Curry, however, has such a diverse skill set that he can score in so many ways, but these moves are what he goes back to when he takes a “tool” off of his toolbelt.

What is your favorite Steph Curry signature move? Tell us about it in the comments!