How Many NBA Rings Does Steve Nash Have? 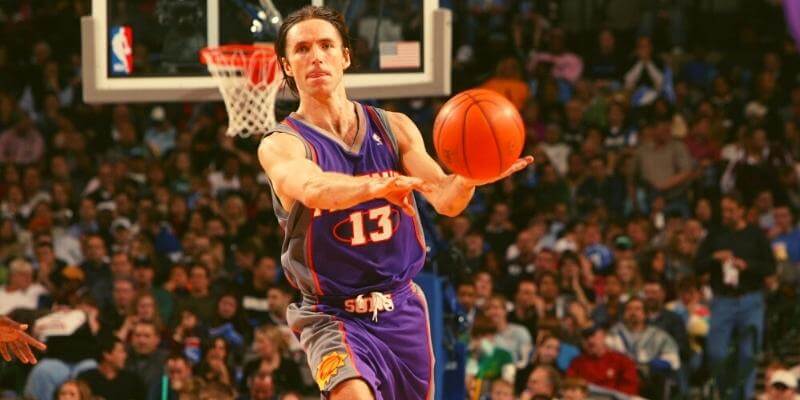 Though it wasn’t always true, today’s NBA is a ring-focused league. Championships, and the legacy that comes with them, has taken center stage. The more a player has, the better their career. However, there are a few stars who still get respect despite never hoisting the trophy.

The following article will look at Steve Nash’s career from a championship perspective (he hasn’t won a ring in his NBA career). That will reveal, not just how skilled he was on the court, but how certain players can overcome championship stigmas and thrive despite not having great postseason success.

Steve Nash was a great player who many consider to be a top five point guard of all time. He was fast, quick, and had one of the best passing minds in league history. In fact, he was so good at spreading the ball around that he made everyone on his team better.

He had seven seasons where he averaged more than 10 assists a game, and he averaged 14.3 points/8.3 assists for his entire career. He could score with the best of them, but also had the ability to find the open man in just about any offensive set.

That led to one of the highest-powered teams of all time in the seven-second Suns. Though Nash’s stats don’t seem incredible compared to many modern guards, especially due to the huge influx in three shooting, he was a true leader that elevated every team he played with.

The Rise to Stardom

Nash was not always a superstar, but he always had the potential. Undersized and from a small school (Santa Clara) he did not have a ton of fanfar coming into the NBA. Still, he was a mid-first rounder who quickly adapted to the faster league.

He had a few solid early years with the Suns and Mavericks, but it wasn’t until the middle of his career that he started to come into his own. Spurred by better talent, he became a force who  turned a stagnant franchise into one of the highest-powered in the league.

All of Nash’s great years occurred in Phoenix. He averaged more than 15 points a game (closer to 20) for every season, and netted 10 or more assists per contest.

His ability to move quickly, pass, and shoot created a package that few teams could answer. Under his leadership, the Suns rose to greatness and made the playoffs season after season. However, he soon learned that winning doesn’t always lead to championships.

The 2000’s Suns were one of the most electric offenses of all time, and a lot of that was due to Steve Nash. Not only did he raise everyone up, but his high level play earned him back-to-back MVP awards in 2005 and 2006.

Unfortunately, for all of his talent, fate was not on his side. The Suns had several deep playoff runs, but they could never quite get over the hump. They played well, but lost to many all-time great teams like the 2006 Mavericks and the 2007 Spurs.

Even their pushes in the late 2000’s against the Lakers fell short. Nash made plenty of Conference Finals, but he never got all the way. He had a storied career, but it was one without a ring. He never even made a Finals series.

Steve Nash is one of the best point guards to ever play the game. Despite his numerous accomplishments, he’s known as someone who never got a ring. That’s how much not having a title can hang over a player’s head.

Even so, his talent was unquestionable and his skill nearly unmatched. That’s why, even today, many people consider him one of the greats. He didn’t bring Phoenix a ring, but he gave them a superstar and plenty of great years.