Why Is Steven Adams Called The Aquaman 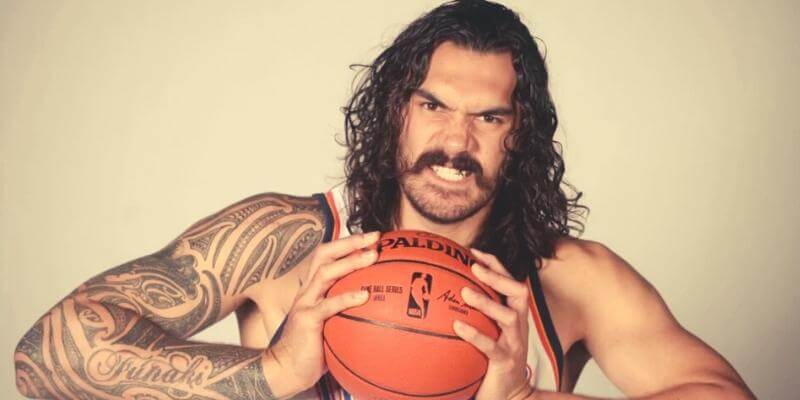 Those who follow the NBA know that Steven Adams is one of the most fascinating guys in the league. He has a pretty avid following on YouTube, with users compiling highlight videos of just his antics. Words like “legend” and “savage” are thrown around when describing the seven-footer.

Another familiar nickname is Aquaman. But why?

Well, the Kiwi (Adams is from New Zealand) looks so much like the Jason Mamoa-styled Aquaman that he garnered the fitting nickname.

Steven Fuanki Adams was born in New Zealand on July 20th, 1993. His mother is Tongan – explaining the thick jet-black hair that Adams sports on the hardwood – and an English father. Adams was only a teenager when his father passed in 2006. After his father’s death, Adams started down the wrong path, skipping school and acting irresponsibly.

If it wasn’t for his brother, Warren, Adams may have never righted the ship in the way he eventually did. He was introduced to basketball through his brother and, with his 6’11” frame underneath him, it was a natural fit. After a year in prep school in Massachusetts, Adams enrolled at the University of Pittsburgh.

His time at Pitt was brief, but Adams made the most of it! He started all 32 games for the Panthers and was named to the Big East All-Rookie Team. After one year, Adams was ready for the big leagues. Adams was drafted by the Oklahoma City Thunder 12th overall, becoming the first New Zealander ever to be drafted in the first round.

He was lucky enough to have been drafted by the Thunder who were coming off of an NBA Finals trip the previous season. Led by Kevin Durant and Russell Westbrook, the Thunder needed a tough presence under the basket. Adams certainly fit the bill.

During his eight seasons in OKC, Adams’ Thunder teams made the playoffs seven times. They also made the Conference Finals two of those years, coming one game away from beating the historic 2015-16 Golden State Warriors team. Adams was a big part of the team during his tenure. He even signed a four-year $100M contract in 2016. In 2020, Adams was traded to the New Orleans Pelicans and then promptly traded to the Grizzlies the following year.

Adams is in year nine now, and his production is still strong. Over his career, Adams has averaged 9 PPG along with almost 8 rebounds per contest.

The Aquaman character began all the way back in 1941 (before the United States entered World War II!). Aquaman was a very popular character through the ‘40s and ‘50s, but lost steam in the ‘80s.

Aquaman has seen several variations in his look before settling on the new look Aquaman in the ‘90s. Gone was the short red-haired superhero. The new-look Aquaman had long flowing blond hair and facial hair. His physique was beefed up too (as were many superheroes over the years).

In 2018, actor Jasom Momoa signed on the revive the Aquaman franchise. Momoa gained fame playing the crazy Kohl Drago on Game of Thrones. He impressed a lot of people in that role and has an undeniable superhero look. Like Steven Adams and basketball, Jason Momoa playing Aquaman fit perfectly.

Aquaman has generations of fans. But, the character’s costume and overall look has really taken a 180 degree turn. As is the case with many superheroes, the looks will update with the times and popular culture around them. It happened with Batman in the DC Universe. Just take a look at some of the early Avengers characters and their look as well.

Take a look at this splitscreen as proof of how drastic a look Momoa’s new Aquaman has taken.

Big difference huh? On second thought however, when you compare the look that DC had for Aquaman starting in 1994 isn’t that far off from the Jason Momoa take on the hero.

As the first New Zealander ever to be selected in the first round of the NBA Draft, Steven Adams had some pressure entering the league. Now, with the all too fitting nickname of Aquaman, Adams has some new big shoes to fill.

Adams is one of the most unique players in the league and Jason Mamoa is the Steve Adams of actors. This mariage of sports and pop culture doesn’t seem too forced and with one side-by-side picture of Adams and Mamoa with their long black hair you can see the fit. In other words, the nickname is a slam dunk!

What do you think of the Aquaman nickname for Steven Adams? Let us know in the comments section below!