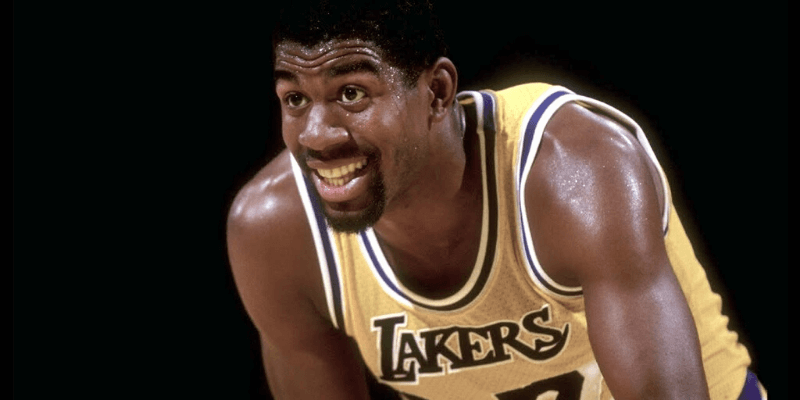 If you think about it, the NBA point guard position is one of the most demanding roles in sports. To become an exceptional point guard, you must be a good ball-handler, know how to orchestrate a good offense, understand the strengths and weaknesses of each player on your team, and do all of this at the highest level possible.

Point guards also experience a lot of pressures of running a team, along with the coach, and have to step in as the leader in many situations as they are the focal point of most teams. This means that not only should a point guard’s physical toughness be strong, but they should have an immense amount of mental toughness as well.

However, through the course of NBA history, there have been some tall point guards who have had top-notch, Hall of Fame careers. We are going to take a look at the tallest point guards in basketball history and how they played.

Johnson is the most skilled point guard of all time. In 1996—when the NBA was celebrating its 50th anniversary—he was recognized as one of the greatest players in the history of the NBA. His court vision, excellent passing skills, and high basketball IQ made him a ruthless point guard for the Los Angeles Lakers.

He was also a 12-time NBA All-Star who led the league in assists four times and won three MVP awards.

Recognized as the 36th best athlete of the 20th century by ESPN, Roberston put up almost unheard of numbers in his NBA career. In his first nine seasons, he was elected to the NBA’s All-First team and was the first player in the NBA to ever average a triple-double for a whole season. He also managed to win an MVP award in an era that was often dominated by big men like Wilt Chamberlain and Bill Russell played which clearly shows how talented he was.

At the moment, Jason Kidd is the assistant coach for the Los Angeles Lakers, but during his playing days, he was a brilliant point guard who finished with 107 career triple-doubles. He also ranks second in all-time in assists and third all-time in steals in NBA history.

He evolved as a player filling roles for teams as needed. He improved his shooting abilities over time and is currently tenth all-time for most threes made. He also became dangerous on the low post against smaller opponents.

While Walt’s rookie year didn’t pan out as he had hoped, he almost doubled his rookie points in his second season in the NBA. He improved his average PPG from nine to 17.5, becoming one of the most improved players in the league at the time.

Frazier excelled in pressure moments which was witnessed in Game 7 of the 1970 NBA Finals. Known as the “Willis Reed Game” for the heroic feat of the hobbled Knicks center playing under excruciating pain after having gotten injured in Game 5, the actual hero of the game was Frazier, who finished with a staggering 36 points and 19 assists to lead the Knicks to the title over the Lakers.

Gary Payton, also known as ‘The Glove’ is the only point guard who has ever received the NBA defensive player of the year award. His defense was very good— he was voted to the NBA all-defensive team nine times and he had a knack for trash-talking with his opponents to the point where his constant jawing helped him get into his opponents’ heads and affect their performance.

The point guard position is not constrained to height, however, taller point guards have an added advantage. Over the years, the average point guard height has been increasing due to the evolution of the game and the fact that players are learning guard skills no matter their height for a more diverse game.

Do you think height is crucial in the point guard position? Let us know what you think in the comments below.