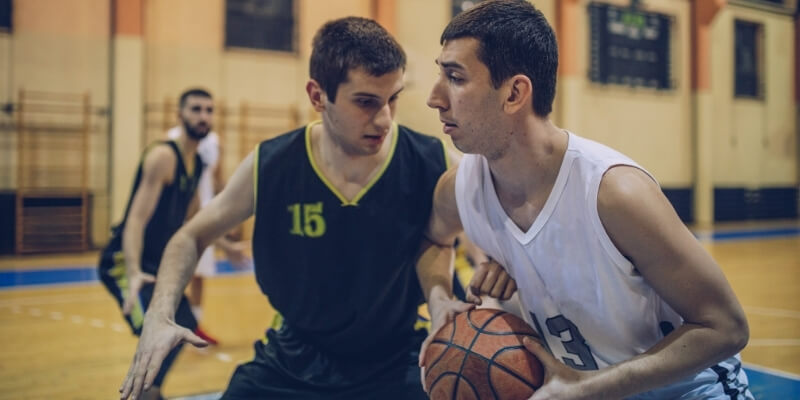 But not every foul is created equal. For those who may have never grasped the differences between foul types, and have maybe felt embarrassed asking, then this article is for you.

Let’s face it, no one wants to be out of the loop when it comes to not understanding “simple” rules in basketball. Some terms, though, aren’t always spelled out plainly. So we are here to explain the difference between the team foul and the personal foul.

Even though the terms mean different things, however, doesn’t mean that they don’t affect each other. In fact, each personal foul committed by a team during a game is added up to make the team foul number.

Let’s look at this in-game scenario for a better understanding of how personal and team fouls work:

Now let’s say Player C commits a foul next. That foul would be Player C’s first personal foul but their team’s third team foul after adding up the fouls committed by Players A, B, and C.

Now that we have a better handle on the differences between the team and personal foul, let’s dissect each type a bit deeper.

Each player is allowed a certain number of fouls in a game before they “foul out”.

Once a player fouls out the scorer’s table notifies the referee who then notifies the player and their team. Teams then have 30 seconds to replace the player who fouled out.

In thinking about game strategy, defensive situations warrant more physical play and contact as you are trying to both keep your opponent from scoring while also trying to defend your basket. On offense, you are more careful with your body while dribbling and passing your way to scoring a basket.

Common fouls aren’t the only personal fouls that occur. Other fouls, that count also as personal fouls for players, are flagrant and technical fouls.

A flagrant foul is one that involves excessive force. Here is a great example of a flagrant, or intentional, foul during a college basketball game a few years ago. You will notice the excessive force used both in the body and with hands to the face of the offensive player.

The NBA also utilizes the flagrant 1 and 2 rules but is slightly different. If a player receives a flagrant 2, they are not only ejected but fined by the league for the play. Also, if a player receives two flagrant 1’s in the same game then that results in an ejection (think the two yellow cards system that they use in soccer).

While still a foul, a technical involves no excessive contact but an unsportsmanlike play. Many times you will see players get technicals for taunting the other team or yelling at the referee.

Coaches aren’t safe from tech’s either, with many of them receiving them for yelling at the refs after a perceived missed call by the coach.

In the NBA, technical fouls are either classified as unsportsmanlike or non-unsportsmanlike. These instances result in free throws for the opposing team and allow them to retain possession of the ball.

So, how exactly do all of these personal fouls affect your team? It depends on the level of the game, but if a team gets too many team fouls then the opposition is awarded free throws, even for non-shooting fouls.

In college, when a team chalks up seven team fouls in a half, their opponents enter what is called the bonus. Once in the bonus, any foul committed results in one-and-one free throws for the team.

Once a team collects ten team fouls the opposing team gets an automatic two foul shots for non-shooting fouls. The good news is that at the end of each half, both side’s team fouls are reset back to zero.

While college is played in halves, team fouls in the NBA are collected (and reset) each quarter. Each team is allowed five team fouls before allowing the opposing team to enter the bonus, which results in foul shots.

One difference in NBA games is that team fouls only consist of defensive and loose ball fouls, meaning that offensive fouls do not add to the total.

The league leader in all-time points is also atop the list of all-time fouls. Kareem played in a different era when the game was much more physical. Just imagine how many fouls he got away with!?

The Mailman was a bruiser who played in the rough and tough ‘80s and ‘90s. Like Kareem, he took as much punishment as he gave out but usually delivered the knockout blow.

Robinson is the first Small Forward to show up on the all-time list, coming in tenth overall. He could fill up a stat sheet in his heyday but also averaged 3 fouls committed per game over his 17-year career.

Carter flew under the radar when it came to his notoriety as a hacker. But underneath all of his scoring and dunking prowess was a player not afraid to mix it up with the opposition.

Stockton, all 170 pounds of him – was a tough cookie for the Utah Jazz. The league’s all-time assists and steals leader was a pest on defense, and that led to some fouls during his day.

It is important to understand the different rules behind fouls at both the college and NBA levels if you want to become the ultimate fan. While the two terms are different, the resulting outcomes of both go hand in hand during games.

Sometimes that silly personal foul committed at the beginning of the half or quarter comes back to bite you at the end of the game if it results in bonus foul shots for your opponent. Any way you look at it, fouls are a part of the game and always will be.

What is the hardest foul you have seen committed in a game? Let us know in the comments section below!