What is a Technical Foul in Basketball? 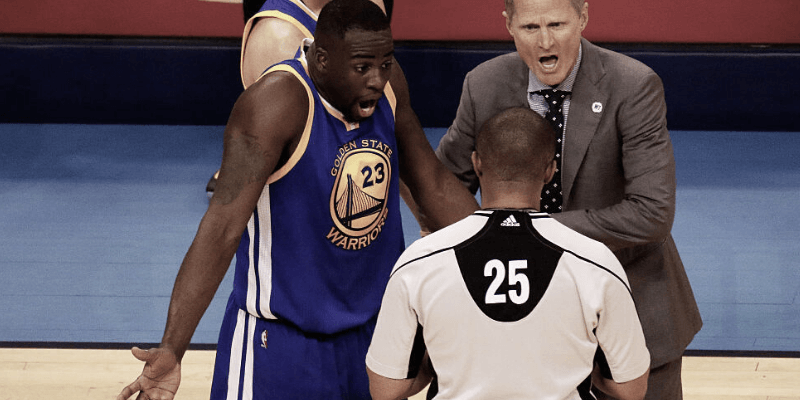 Athletes tend to be some of the most intense and competitive people on the planet. This competitiveness and intensity picks up substantially when you get to the professional level. Sometimes that intensity can boil over and players can find themselves in a very vulnerable and emotional spot. Those emotions can range from frustration to anger, to aggression, and if they aren’t careful they will have to suffer the consequences.

In basketball, that consequence is usually a technical foul (or a “T”, for short). A technical foul is a violation of certain game rules usually involving unsportsmanlike conduct. There are numerous ways in which a player, or team, is assessed a technical foul by the referees. Some are very commonly seen and others are very rare. In fact, in doing research on this piece, there were several instances in which I never knew a certain act within a game resulted in a T.

Let’s dive deeper into the world of technical fouls. We will look at the rule as it is stated in the NBA rulebook and explore some interesting facts and statistics about the technical foul. Even if you are a superfan, I guarantee you will learn something new. I know I did.

If a team no longer has any timeouts and a player or coach calls for a timeout, the team is charged a technical foul. This is a very minor technical foul infraction in relation to other instances and doesn’t happen all that often, however, when it does it is usually a sign that the coaches haven’t communicated well enough with their players on how many timeouts the team has left or the team isn’t paying close enough attention.

The most famous situation relating to a T given to a team requesting a timeout without one left happened to Chris Webber and the Michigan Wolverines in the 1993 NCAA Championship game. Webber called a timeout late in the game with his team down two points to the North Carolina Tarheels and the resulting technical foul all but sealed the victory for UNC and cemented Webber into the history of the NCAA Tournament.

Although the correct call in this situation is a technical foul, a delay of game is usually addressed by referees with a simple warning, as they understand that the less they blow their whistle, the better the game flows and the more entertaining it is for fans.

The most common delay of game actions in a game is not immediately allowing the ball back into play, touching the ball as it comes through the basket when should simply run back down the court, and touching the ball while your opponent is out-of-bound attempting to inbound the ball.

This is as simple as a team having too many players on the court when the ball is inbounded by the opposing team. The most common infraction of this section of the rule is a player being subbed into the game not communicating with the player that they are replacing and they end up starting the next possession with 6 guys on the court. This act is a big pet peeve with coaches as it should be simply executed.

4. Hangin on the Rim

Like many calls that refs make, this is an interpretation call. Players are not allowed to hang on the rim after a dunk or on defense while the other team is attempting to score. In the case of hanging on the rim after a dunk, this is seen as an act of showing up the opposing team as it is excessive. However, if a player hangs on the rim for safety – if another player falls and is positioned underneath the dunker – then it is acceptable.

This technical foul is very vague but there are several acts by players and/or coaches that constitute a conduct-related technical foul:

These acts, if severe enough may also result in a rejection from the game if not a simple technical foul.

Fighting is completely prohibited in basketball and will lead to a technical foul at the least and at most, ejection from the game and potential monetary fine and/or suspension from the league. The NBA used to experience more in-game fighting in the ‘70s and ‘80s but has done a really good job of cleaning up this aspect of their past. 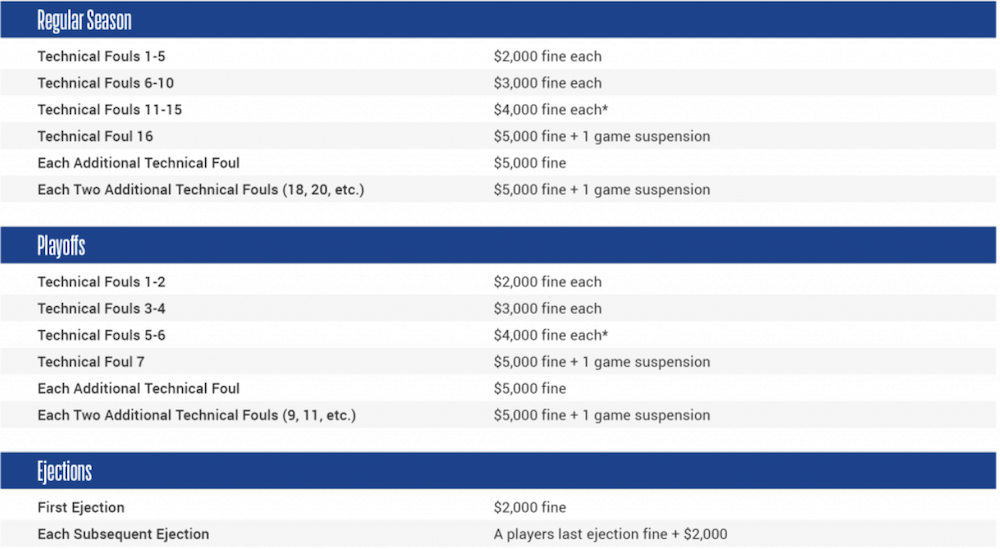 An excessive amount of technical fouls within a single season will result in fines to be paid to the league. Below is a list of the technical fouls and accompanying fines from the NBA’s rules website.

NBA’s Technical Foul: Behind the Numbers

In researching the history of technical fouls in the NBA, I came across some really interesting, and often funny, tidbits.

During the 2000-01 season, Rasheed Wallace compiled 41 technical fouls, a record that may be safe in the league due to the difference in culture since the early 2000s. Wallace only played in 77 games that year, meaning he averaged a technical foul approximately every 1.9 games. While Wallace had a very good career in the league, the technical foul record is definitely something that has followed him since his retirement.

The top 5 in most cumulative technical fouls in NBA history sort of caught me off guard. The reason? Of the top 5 players on the list, 4 are Hall of Famers, and the other is the aforementioned Rasheed Wallace, a 4-time All-Star.

The top 5 is as follows:

The other interesting aspect of this list just goes to show you the tone of the league in the 1980s and 1990s as a “tougher” league with the idea that you had to be strong and resilient in order to survive.

Nowadays, the league has changed into more of a finesse sport and players understand the importance of taking care of their bodies to maintain a long and healthy career as opposed to one where you are constantly banging and bruising your body against your opponents as a way of showing your toughness and strength. As a result, today’s NBA basketball product is better than at the end of the last century and the league has prospered tremendously because of it.

The Lighter Side of the Technical Foul

While technical fouls can be a bit jarring if witnessed in person, as much of the behavior that results in a T is either profane, violent, or just downright ugly, there is a funny side of the tech.

This video combines unbelievable, silly, and often odd technical fouls given by referees. In most instances, it looks like the refs were having a bad day and took some of their frustrations out on the league. At the end of the day, it looks like most of the players could laugh the situation off, but unfortunately, the tech was still given.

Technical fouls are often a large part of a game and you won’t go too long without seeing one if you are an avid fan of the NBA. Of course, the overarching message is that technical fouls hurt your team in a number of ways. They can be a momentum changer, a morale killer and quite literally cost your team points if the other team makes their free throws.

But it can’t be denied that technical fouls are exciting at times and show you the amount of passion and intensity that it takes to play a professional sport with the physical and emotional toll like the NBA. Everyone loses their cool in life. For NBA players, it just happens on a larger stage, and with a consequence: the technical foul.

Who is your favorite player in the league that receives a lot of T’s? Let us know below!