How Many Rings Does Tim Duncan Have? 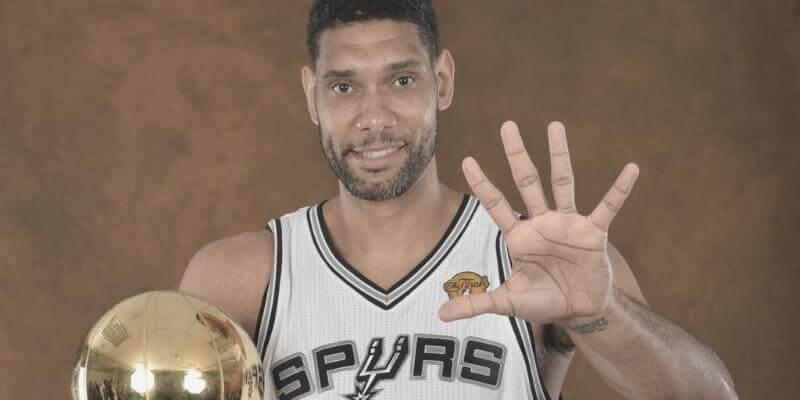 In most sports, players need at least one championship to cement their legacy among the greats. In the NBA, they need much more than one.

While there are a few greats without any jewelry, the top of the top all have three or more championships. That includes Tim Duncan.

That, combined with a discussion on other all-time players, will show just how much championships matter, and why there’s such a focus on them in modern basketball.

No league puts such a high emphasis on rings like the NBA. Though every player who has ever stepped foot on the court wants to win it all, the drive to take home a championship and forever cement their legacy is something that came into the forefront over the last few years.

Fans, analysts, and players have all become increasingly interested in player legacy. Where a single ring used to be enough, now the bar is much higher. Most great players have at least three rings, with the truly special careers being capped by five or more.

Those benchmarks are what help separate solid, good, and great players. Stats, circumstances, and regular season records all matter to a certain point, but they all pale in comparison to championships.

Right Out of the Gate

There are many things that make Tim Duncan great, but one of his most notable features is his ability to succeed. Most players, even Lebron and Jordan, took a few years to get acclimated to the NBA. Duncan, however, came out swinging.

After being drafted first overall by the Spurs in 1997, Duncan helped turn the last place team completely around by bringing the organization their first-ever title in 1999. His ability to adapt in just two years showed how special he was right away and set the stage for his stellar career.

Though the Spurs would not be able to get past the early 2000’s Kobe/Shaq Lakers, it was only a matter of time before the league could hold back someone of Duncan’s caliber. The Spurs completely revamped their roster, brought in stars, and built a complete team.

That’s all Duncan needed to dominate the 2000’s. His power, mixed with the outside shooting and high play of both Tony Parker and Manu Ginobili, allowed the Spurs to create a dynasty. They would win three championships in five years, taking it home in 2003, 2005, and 2007.

The late 2000’s were not as kind as Duncan would have hoped. After streaking to those three titles, the Spurs were once again foiled by a Kobe-led Lakers team. Even so, they were not to be denied.

After falling to the Heat in 2013, a seemingly ageless Duncan teamed up with the young Kawhi Leonard to win his fifth (and final) title during the 2014 season. It was an incredible run to cap off an incredible career.

There are many amazing NBA players (Hakeem Olajuwan, Dirk Nowitzki, Giannis Antetokounmpo) with one championship, and there are plenty (Allen Iverson, Tracy Mcgrady, Charles Barkley, etc.) who never got a ring at all.

Still, no matter how much skill someone had or how well they played during their time, nobody gets into the all-time conversation without at least three rings. There are many incredible players, but the top fifteen-or-so all reached the peak of the mountain again and again.

Three is the first cut off. Out of the 4,000 plus athletes to step onto an NBA court, only 105 have three or more rings. Even less than that were starters. Duncan truly separated himself because he hit a benchmark only 37 players have ever reached.

That low number shows why Duncan’s last win in 2014 mattered so much. It wasn’t just that he was able to win at an older age with an aging team, it was that he managed to truly cement his legacy as someone special. Four rings is great. Five rings makes someone immortal.

Tim Duncan is considered the greatest power forward ever. He’s also widely known as one of the top players of all time. A lot of that has to do with his rings. There are plenty of other big men who won championships, but almost none of them are able to match what Duncan did.

He’s a great player who worked to separate himself from the pack each and every season. Though there were some setbacks during his journey, he still persevered. He didn’t just reach the top. He did it five different times.