What Is The Top Of The Key In Basketball 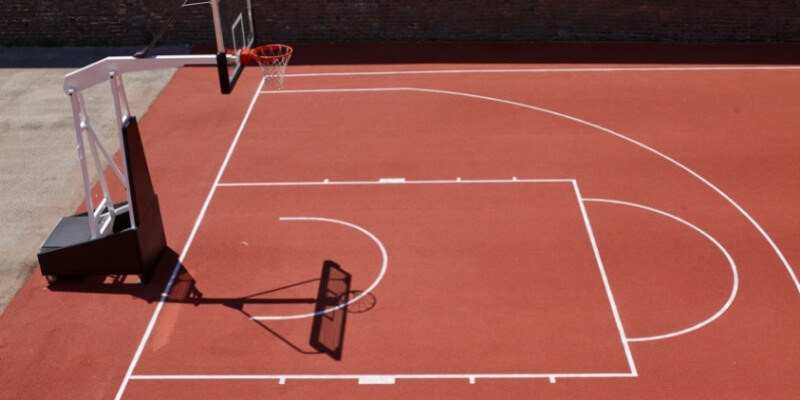 Whether you play and want to sharpen your know-how or are a spectator with a desire to beef up your basketball IQ, understanding the different spots on the basketball court will only enhance your knowledge of the game.

The “top of the key” is one such term that comes up numerous times during games, but the meaning, and importance, of the term may be lost on you. For those unsure fans, don’t worry!

The top of the key is labeled in the image below. Become familiar with that spot, because we will break down its impact within the game of basketball and discuss some interesting facts about one of the most popular spots on the court.

For those familiar with what a key looks like (so, everyone?!), you may wonder why they picked that terminology in naming a part of the basketball court. Let’s focus on the whole key before we get into the top part.

The key specifically refers to the free throw lane, making the top of it like the key head. If you look at the above image, a photo of a modern basketball court, you may be confused as to why it’s called a key in the first place. Let me explain.

A basketball court didn’t always look like it does in the above pic. There was a time that the lane was a lot more narrow.

As you can see, the lane used to be much more narrow. With a little imagination, you can definitely see a key shape with the lines of the paint.

The History Of The Key

The above black-and-white picture is what the original key looked like, with the narrower lane and free-throw circle on the top (aka Top of the Key). The narrow lane measured six feet wide and was a staple in the game until the style of play began to inhibit the size of the key.

Centers, notably George Mikan the game’s first dominant big man, began taking over the sport. They were putting up big numbers on the court and clogging the lane.

So, before the 1951-52 season, the league doubled the width of the key from 6 to 12 feet wide. Just thirteen seasons later the NBA widened the key again from 12 to 16 feet. Big men, like Wilt Chamberlain and Bill Russell, again were dominating the league and it needed a change.

Other Names For The Key

Most players, coaches, and announcers today don’t call this the key. They often refer to it as the “lane”, because of the lane it made with its lines or “paint” because it was often painted the color of the home team.

Other countries have called it a “cup” or “bottle as well, but those names never made it into American basketball terminology.

Perhaps the oddest key was utilized by the International Basketball Federation (FIBA due to the French translation Federation Internationale de Basketball). FIBA is the national association that governs basketball on a global level. They also organize men’s and women’s basketball events for the Olympics.

From 1956 up until 2010, FIBA’s key was in the shape of a trapezoid, making the lane very wide towards the basket.

After 2010, FIBA decided to update its key and began using the rectangle with a little wrinkle. The free throw circle, which includes the top of the key, is smaller than the lane and doesn’t make a clean line between the two.

Check out both FIBA key iterations below.

Top Of The Key Functions In Basketball

The top of the key is an important place on the basketball court for many reasons.

Entry passes are also made easier from the top of the key because of the space you have from that part of the court.

Imagine calling a play while you are in the corner of the court without any teammates close to you. It would be tough to pass them the ball and equally as difficult for them to get away from their defender to catch the entry pass because of the lack of spacing.

The top of the key is where every possession starts during a pickup and/or half-court game. Because you don’t have a tip-off during pickup, the game starts with the offense and defense “checking ball” – bouncing the ball back and forth to each other to acknowledge the start of the possession.

During half-court games, if you get a rebound from the other team’s miss (as long as the ball touches the rim), you bring the ball back to the top of the key before you begin to play offense.

There are some disadvantages to utilizing the top of the key too much during today’s NBA. A big push advance stats and analytics in the game have shown that top-of-the-key shots aren’t the most statistically successful.

Granted, there are still plenty of shots from the top of the key (hello pull-up threes!) but, those shots are not statistically or strategically the most sought after.

The top of the key is one of the most popular places on a basketball court for good reason. Not only does it have a catchy nickname, but offenses are run effectively from this place as well.

While the key and its multiple parts have been changed throughout basketball history it still remains a part of the game in almost every aspect imaginable.

Even though the top of the key isn’t the best statistical shot on the court, is it still one of your favorites? Let us know in the comments below!