UCLA Players in the NBA 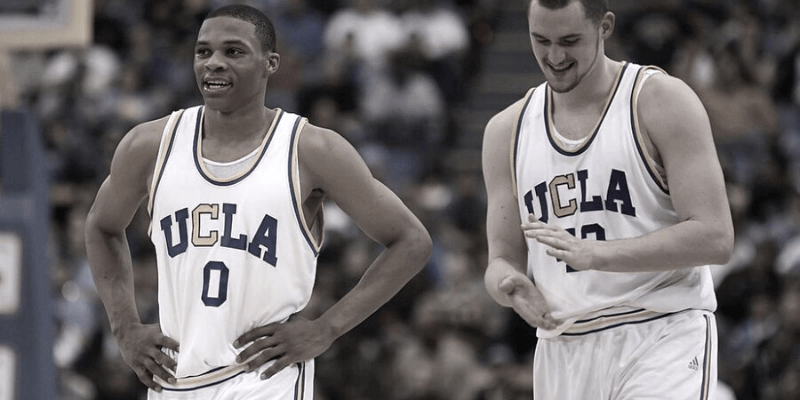 UCLA is arguably the most successful college basketball program in the history of the sport. They rank 7th all-time in wins and have a total of 11 NCAA titles under their belt. Kentucky is second in that category winning eight overall titles. A large part of their success was due to the teams they put together under legendary coach John Wooden in the ‘60s and ‘70s but they still continue to put a great product out on the court today.

They have been to the NCAA Tournament seven of the last ten years and have made the Sweet Sixteen in four of those years. They also reached the Final Four in three straight years from 2006-08 under Ben Howland. While it is next to impossible to live up to the winning expectations cemented during the “Wooden Era” there is much to be said about their recent track record as well.

The reason for these successes is due to the teams they have had and the amazing talent that has played at UCLA. While there are currently 13 players representing UCLA on NBA rosters, the Bruins have been responsible for producing some of the greatest NBA players in the history of the league. And their winning ways didn’t stop in college either as many went on to win several NBA titles. Here are a couple of notable historic Bruins that excelled in the NBA as well.

Best All-Time UCLA Bruins to Play in the NBA

Alcindor was one of the most dominating forces ever to play college basketball. Standing 7’2” tall, he had the luxury of being taller than everyone he played against and his career stats of 25.5 PPG and 15 RPG told that story better than anything. Alcindor, originally from New York City, took his talents all the way across the country to play for the legend John Wooden. That act of faith alone is a great sign of the respect the entire basketball nation had for the Bruins.

After college Alcindor, who changed his name to Kareen Abdul-Jabbar, starred in the NBA. He won titles with the Milwaukee Bucks and Los Angeles Lakers and owns the most unstoppable shot in NBA history, the “skyhook”. He was a 6-time MVP and still leads the league in total points ever scored.

Bill Walton is also one of the most dominant players ever to play the sport of basketball. His time at UCLA was turbulent as the Vietnam War raged on and Walton stuck his neck out to protest the war while doubling as the best college basketball player in the nation. He still attributes his ability to protest the war because of the love and support from Coach Wooden to always do the right thing and do what you believe in.

One place Walton always seemed to do the right thing was on the basketball court. He averaged 20 points and almost 16 rebounds during his time at UCLA and went on to have a Hall of Fame career in the NBA as well. He was hampered by injuries during his NBA career but still managed to win two titles, one each with the Portland Trailblazers and Boston Celtics, and the 1978 MVP Award.

As a California kid, Wilkes was a silky scorer in high school and it made sense to head to the best team in the country right down the road from his hometown. Wilkes, who played alongside Bill Walton, won two titles and was also a part of the Bruins team who won 88 consecutive games. Wilkes is another former Bruin whose college success bled right into the pros where he won 3 NBA titles with the Los Angeles Lakers and is a member of the Basketball Hall of Fame.

Current UCLA Bruins in the NBA

Now that our trip down memory lane is over, let’s take a look at some current former Bruins that currently play in the league. While we can’t dissect every former player’s career, below is a list of all of them and a deep dive on some of the more notable ones. Enjoy!

While not completely different, the Russell Westbrook of today doesn’t exactly match the one who donned a UCLA jersey. Westbrook is still high energy in the NBA but that was one of his main roles in college. He relied on his energy and defense to get playing time in his freshman season and was named the starter his sophomore year only after Darren Collison got injured. He averaged 12 points, 4 rebounds, 5 assists and almost 2 steals his sophomore year.

After the Bruins lost in the Final Four, Westbrook decided to enter the NBA Draft and was selected 4th overall to the Seattle Supersonics, who relocated to Oklahoma City less than a week later. While it’s safe to say there have been some ups and downs during his NBA career, the decision to leave UCLA early really paid off. He is a 9-time All-Star, 2-time scoring champ, and he won the MVP award in 2017.

UCLA Highlights: All-American, Pac-1 Player of the Year, Pac-10 Freshman of the Year

Kevin Love’s stint at UCLA was only one season but he truly made the most of it. Not only did he impress the old guard of UCLA, regularly asking people like Bill Walton and John Wooden for advice, but his play on the court was stellar. He led his team to the Final Four in 2008 and along the way averaged 17 points and 10 rebounds per game.

Love’s impact on UCLA was seen in the pros as well and he was selected first overall in the 2008 NBA Draft by the Minnesota Timberwolves. Love’s pro career has been extremely successful. He is a 5-time All-Star, 2-time All-NBA selection and he won the 2015-16 NBA title playing a huge role on that Cleveland Cavaliers team alongside LeBron James and Kyrie Irving.

Just like Kevin Love, Lonzo’s career at UCLA was short but very impactful. Ball was a 5-star recruit coming out of high school and his play continued to dazzle once in college. As a bigger point guard, he dominated his opponents with a combination of size and quickness rarely seen at the college level. He averaged 14 points, 7 assists, and 6 rebounds in college and won Pac-12 Rookie of the Year while also being named an All-American.

Ball was selected 2nd overall in the 2017 NBA Draft and played a few years with the Lakers before being traded to the New Orleans Pelicans before the 2019-20 season. While Lonzo Ball hasn’t yet reached his potential as a pro player, he is projected to become an elite player in the league, and there is no arguing his time at UCLA, while short, was spectacular.

There are a couple things UCLA’s college basketball program has done historically well, and that’s win and produce top-level talent that goes on to succeed at the next level. This fact is evident in the titles won by their teams and their place among the top schools in college basketball history. They are still big-time players in recruiting the best high schoolers and their legacy lives on to this day.

Are you a Bruins fan? What UCLA team was your favorite throughout history? Let us know below in the comments!