What Is Pickup Basketball? 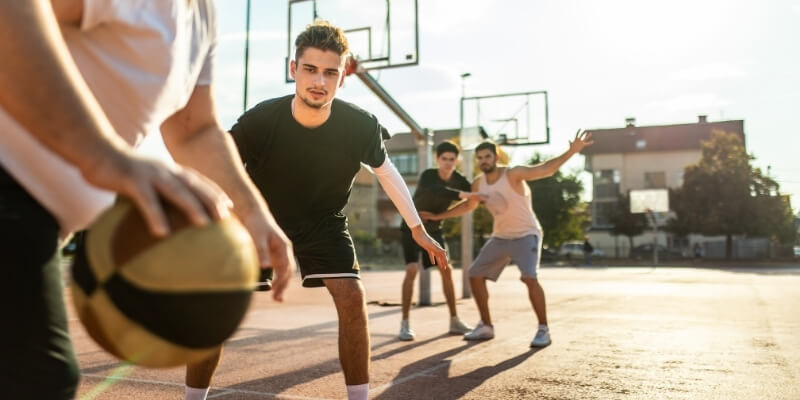 Pickup basketball is a blast. It can be played essentially anywhere, as long as you have a ball, hoop, and a couple of able-bodied players. There’s no stress about winning, losing, or making the team. Playing time doesn’t matter: you’re out there the entire game, and you are guaranteed a workout—whether you are running half or full-court games.

Pickup can be as casual or organized as you would like it.  But, we will break down the always enjoyable art of pickup for those unaware of the details.

Officially, pickup basketball is any game that begins spontaneously between a group of players. That’s about it. It isn’t always disorganized, but typical elements of organization—referees, a scoreboard, and team uniforms—are rarely involved. No coaches, either.

Even though pickup is less organized, there is still a lot to unpack. Let’s take a look at some general bylaws of the game.

In general, the rules of the game are followed closely during pickup games. While I expect Dunk Or Three readers understand the basic rules of the game, here are some basic examples that I am talking about:

Most rules are loosely held for interpretation. For example, a three-second violation isn’t a call that people stress over during games. The essence of pickup is to enjoy the purity of basketball without “rules” getting in the way. If the ball goes out of bounds and opposing teams argue over who it went out on, the usual tie-breaker is a shootout from the top of the key or a jump ball call. There’s no instant replay in pickup!

If you’ve got a rec center, YMCA, or high school gym to play pickup in, then congrats! Renting out court space doesn’t always come easy, but, in my opinion, it’s the best possible place. You don’t have to worry about weather like rain, for instance. Other positives are good lighting, a potential working water fountain, and bleachers to sit on while waiting for your turn to play.

Outdoor basketball is a different beast. You have no control of variables like temperature or wind. Also, if it rains, there’s a good chance your day is ruined. The court is usually asphalt—so no diving for loose balls.

The outdoor game is tougher on outside shooters and caters more to those who like to get to the rim. As a shooter, there are some days when I feel like my shot wouldn’t hit the broad side of a barn due to the wind. Also, on many outdoor hoops, you will find a “double rim,” which looks like two rims are welded together. It’s a pain in the neck for shooting.

You will sometimes find yourself only using half of the court to play pickup. This situation could be due to how busy the courts are or with people who don’t want to run up and down the entire court. Half-court games are definitely less cardio-heavy but still prove to be a workout if you play hard.

To initiate a half-court possession, the offensive player “checks” the ball: he bounces the ball to the defense, and the defense bounces it back. This is a polite way to begin the possession so that everyone is ready. A half-court game tends to be a “make-it-take-it” game, meaning that if a team scores, they get the ball back again.

I think most of us are more familiar with full-court basketball as it most closely resembles the game we see on TV. Possessions alternate when teams score as they would in traditional basketball games. Other than that, a full-court game is similar to any high school, college, or NBA game that you watch.

The great part about pickup is that as few as two people can play. If you have an even number of people from 2 to 10 players, you have a game. You can play with an odd number of people, too—just use one as a sub. The ideal amount for a half-court game is around 6 players for a 3-on-3 game and 10 players (5-on-5) for full-court.

Because there is no game clock in pickup, scoring is essential. Games are played to a pre-determined score—usually 11, 15, or 21, in my experience. Pickup games don’t use two and three-pointers but one and two-pointers. If a player hits a layup, then they are awarded one point. If they hit a shot behind the three-point arc, it counts as two points.

Often, the game cannot be won until a team wins by two baskets. For example, if a game is played to 11, a team must win by two points or more. If the score is tied at 10 and a team hits a one-pointer to make it 11-10, the game is not over until that team scores again. This little wrinkle in scoring makes things more interesting at the end of games. Some pickup games do play “straight,” meaning the first team to 11 wins without having to win by two.

How Are Teams Selected?

Team selection can differ wildly from each pickup game; it usually depends on who’s running it. Let’s take a look at some of the more common ways teams are divided.

This is subjective, but I know my answer: it depends.

I have played some pretty meaningful games in my career, including high school state title games and conference title games in college. Some of my fondest basketball memories, however, were spent playing hours of pickup. In fact, the pickup games that I played in college during our offseason were just as heated as some contests between our conference rivals.

Because the stakes weren’t high, I found that the game of basketball was all that mattered. No girlfriends were there watching and cheering us on, no away fans were yelling insults, no coaches were present to evaluate players. It was just basketball, which is why I fell in love with the sport in the first place.

I could go on about the art of pickup basketball—I love it. At the end of the day, it’s about having fun. Sure, it’s nice to get the win and stay on the court to play again, but running up and down for a great workout and playing a sport you love is what it’s all about.

What do you love about pickup basketball? Let us know in the comments below!