What Is The Ted Stepien Rule? 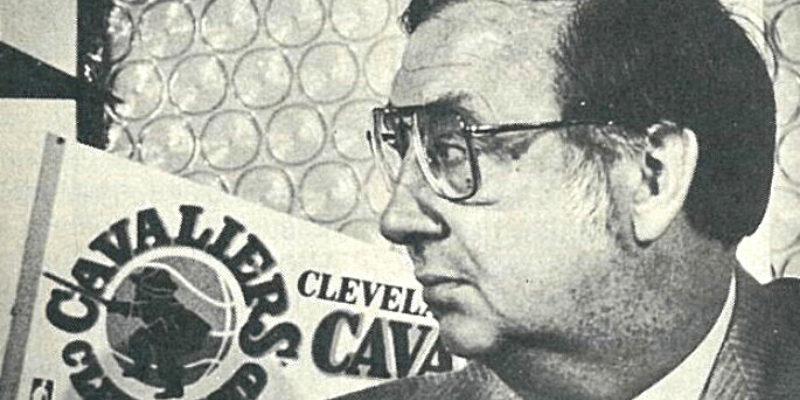 You’ve probably never heard of Ted Stepien. While the former Cavs owner’s tenure in the league was a time everyone would like to forget, there was a silver lining to the way he ran his NBA team. In fact, the Ted Stepien Rule still holds weight in the league today.

Let’s look at a rule that changed the way teams plan for the future.

Who Is Ted Stepien?

While we tend to highlight his incompetence in this article, it must be said that he was a successful businessman.

During the late-’70s professional softball boom in the US, Stepien took advantage, buying the Cleveland Jaybirds in 1978. Oddly, he changed the team’s name to the Cleveland Stepien’s Competitors the following season, an early sign of Stepien’s misguidance in professional sports ownership.

Another blunder of Stepien’s while owning the professional softball team in Cleveland was the Terminal Tower Softball Drop. In an attempt to promote the season, Stepien decided to drop softballs from the 52nd floor of the Terminal Tower to players on the ground. The softballs traveled at around 150 mph on the way down; they injured several spectators and damaged cars in the process. Only one of the balls was caught.

The softball debacle wasn’t enough to sway Stepien away from professional sports. In 1980, he bought 38% of the Cleveland Cavaliers and increased that to 82% in the next few months. Ted Stepien was now a majority owner of a major professional sports team. The rest, as they say, is history.

Stepien only owned the Cavs for three years, but the damage he left followed the team for years. Let’s take a look at some of his lowlights while in the league.

In 1980, Stepien hired Bill Musselman as the Cavs head coach. When Stepien gave up the team in 1982, Musselman was the coach, too. What happened in between was dysfunction at its finest. Musselman’s first coaching stint with Cleveland ended in less than a full season. Next came Don Delaney, Bob Kloppenburg, and Chuck Daly (yes, that Chuck Daly), who lasted a combined seventy games.

During the 1981-82 season alone, Stepien hired four coaches and fired three as the team struggled mightily during this run.

In a December 1980 interview, just months after he took over the team, Stepien made some less than inclusive remarks about the large number of African American players in the game.

His reasoning on the outside was strictly business-related; he said it was hard to find a suitable cross-section of fans. Even if you give Stepien the benefit of the doubt, though, the remarks fell flat, and his reputation suffered.

It seemed like Stepien was etched out of the fossils of Major League Baseball owners in the early 1900s who wouldn’t pay their players. Stepien would withhold player’s per diem, money players used to get for food on the road. When players did get it, the checks often bounced due to insufficient funds in the team account.

The league was made aware of this and began monitoring team per diem funds more closely as a result.

Stepien’s confidence about running a pro sports team bled into front office decisions as well. He was obsessed with making the playoffs immediately—and made some erratic moves in the process.

The craziest one, which drew the ire of the NBA league offices, was trading away five consecutive first-round draft picks. By the end of Stepien’s ownership period, the Cavs lost all first-rounders from 1982 through 1985.

This unprecedented move helped usher in what many call the ‘Ted Stepien Rule,’ making it almost impossible for teams to trade first-round draft picks in consecutive years.

By the end of Stepien’s tenure, he was despised by not only the team but the city of Cleveland and virtually all of the Cavs’ fans. Many Cavs fans fondly remember showing up to Cavs games just to rain boos and insults on the hated Cavs owner in hopes he would get the hint and sell off the team.

The on-court product was unwatchable. During Stepien’s three seasons as Cavs owner, the team won 49 games and had five head coaches (Musselman twice). The team also showed no promise because of the horrible trades of first-round picks.

We mentioned the Cavs not having first-rounders from 1982 through 1985. To put into context just how crucial not having those picks was to their franchise success, let’s recap the draft picks that were chosen in Cleveland’s would-be draft slot each of those years.

The Cavs had the league’s worst record in 1982. The first pick of that draft was future Hall of Famer James Worthy.

In what was a bit of a down year for prospects, given the enormous amount of Hall of Famers selected, the Cavs finished with the third-worst record in the NBA. The third selection that year was Rodney McCray, who never really panned out as a professional. Who else was available in that class, though? Players like Byron Scott, Jeff Malone, and Clyde Drexler.

This is the big one. The Cavs wrapped the season with the third-worst record in 1984. In the last year before the 1985 Lottery system began, the Cavs would have had pick number 3 in the draft. Who was selected third? Oh, just future GOAT Michael Jordan. Ouch.

The Cavs finished tied for the eighth-worst record in 1985 and actually made the playoffs. Stepien was long gone at this point—but their draft picks were, too. The eighth pick in the 1985 Draft ended up being Detlef Shrempf, who would play sixteen seasons and averaged 14 points, 6 rebounds, and 3 assists over his career. Players like Charles Oakley and Karl Malone, the second-leading scorer in league history, were still on the board, too.

The Stepien Rule didn’t only affect the Cavs history; it spread around the league as well. Think of how many blockbuster deals didn’t happen because of the consecutive first-rounder stipulation. Teams without many assets other than high draft picks because of their paltry records can’t make those mega deals—all thanks in large part to Stepien.

Does the Ted Stepien Rule need to exist in today’s NBA?

In a vacuum, yes. It prevents bad owners from making bad decisions that might lead to a team losing its franchise. But nowadays, the league has smart, hands-on owners who (we hope) wouldn’t make these kinds of debilitating moves to their franchise.

Has your favorite franchise been negatively affected by the Stepien Rule in the past? Let us know below in the comments!