What is a Wing in Basketball 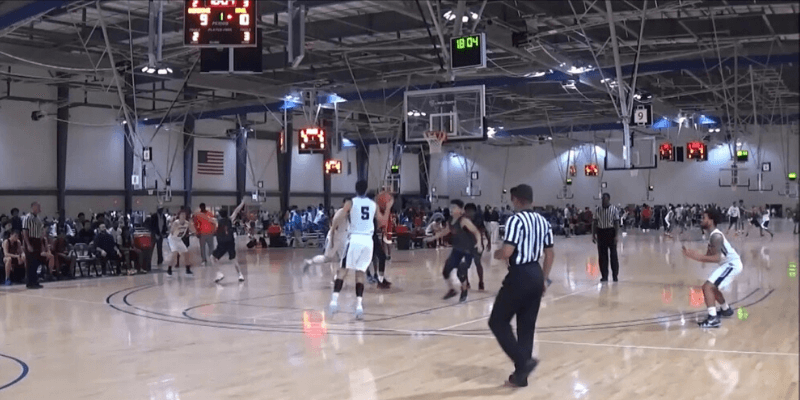 In basketball, we often hear the term “wing” used when describing a play or players. You might hear phrases such as “a pass out to the wing” or “the wing position”. This term can be a little confusing at times because there are multiple uses and meanings for the word.

Let’s dive into “wing” and the two different uses of the term, see what they really mean and how they can be used to refer to both the area on the court and the player’s position.

The Wing Area of the Court

Traditionally we think of the wing on the court as the areas from just outside the free-throw line to the sideline of the court (see the red circles in the diagram below), but actually we can define it as much more.

In theory, the wing on the court is the area outside the paint or free throw lane that extends from baseline to baseline. It is essentially the outer sections of the court along the sidelines. See the diagram below to get a better picture of it (the areas above and below the yellow lines).

This area of the court is often referred to by coaches when drawing up plays or instructing players on where they should be on the court. This makes it a very important part of basketball terminology because it is needed to coach and explain the game. Many plays that are drawn up are based on the wing area. Understanding where to go on the court encourages good spacing of a team’s players and helps keep areas of the court free for more fluid movement.

These areas on the court are differentiated by two sides, the strong side and the weak side. The strong side, also known as the ball side, is the side that the ball is currently on. The weak side is the opposite side. When the ball is swung from one side to the other, defenders shift their positions to follow the ball, as expected, and it becomes the strong side.

Strategically, the wings are very critical to offensive play. Bringing the ball or players out into the wings “stretches” the floor and opens up the lane making it easier for a player to get the ball closer to the basket. One technique is to try to draw the defense’s frontcourt players out of the lane so that they are away from the basket making it harder for them to protect the rim.

This can often be done when the offense has bigs with the ability to play out on the wings. If the offense has a center or power forward with good shooting ability and ball-handling skills, they can move out to the side of the court and their defender must follow them in order to keep them from making an outside shot. This opens up the middle of the court and allows other players to drive the lane or post up under the basket.

This spot on the court is also an important part of any running game. When a team wants to push the ball up the court after a defensive rebound, players are taught to kick the ball out to a player located at this ideal position. This is known as an outlet pass.

This is the ideal position for multiple reasons. It gets the ball out of the traffic in the middle of the court and allows the player at the wing position to make a decision to either start dribbling the ball down the court, make another pass to a player already down the court or slow the ball down and set up the offense. At this position, it is less likely that a player from the other team can come up behind them and steal the ball.

There are many other scenarios like this where these areas of the court are part of a play or an offensive concept, so it is important that all players are familiar with it and know whether they should or shouldn’t be there at any particular time.

As we watch basketball games and hear analysts speak about the game and players, we often hear them talk about wing players. These are players that usually have the skills to play in the areas we just discussed above. We usually think of the shooting guard and the small forward positions as wing players. They are sometimes known as a swingman.

These players are usually good shooters and are very good at moving without the ball to find an open position on the court. They are good passers who can make a pass to the post position, or into the lane if they see an open player. They are also usually some of the best defensive players on the team and are able to defend away from the basket against the other team’s swingmen.

These sharpshooters often play a critical role in a team’s offense. Not only do they stretch the floor and keep the opposing team’s defense out of the lane, but they are often the key to many offensive plays. You will commonly see the first pass from the point guard go out to a swingman.

In today’s style of basketball, the wing player isn’t restricted to shooting guards and small forwards anymore. Just about any position can be a wing player. It is more about where that particular player best uses their skills and where they are playing on the court in a particular style of offense. It is now very common to have power forwards and centers who can bring their games to the outside position.

Lebron James, Kawhi Leonard, and Paul George are all good examples of traditional wing players. And we now see many taller and bigger players such as Demarcus Cousins, Nikola Jokic and Kristaps Porzingis with the ability to play out near the 3-point line.

A team’s wing play is very important to its success, especially in today’s game where we are seeing more and more focus on outside shooting and 3-point shots. It is important for any team to have quality players at this position and to have a coach who understands how to use this portion of the court to their advantage.

Who is your favorite wing player in the NBA? We’d love to hear from you, so please leave your comments.