When is The NBA MVP Announced? 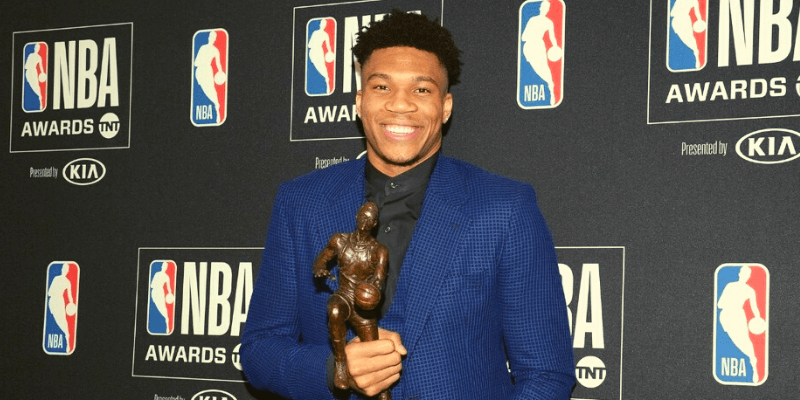 Some NBA fans can recite the past MVPs in the league have been. But many don’t have the slightest idea when the award is actually announced publicly, which is very important to the season’s timeline. When it is announced within relation to when the regular season ends and what happens in the playoffs can play a big part in the selection process and may often sway some of the voters’ votes. So, when the heck is the MVP award announced?! Glad you asked!

The NBA’s MVP is usually announced at the end of June, although the timelines have always been fairly fluid due to scheduling and the NBA’s history of announcing the award and their current awards ceremonies (more on that later).

While the date for which they announce the award is a bit of a moving target, the reason behind why the award is so important in the annals of time isn’t.

Why The MVP Award Is So Important

Who wins the MVP award is a great barometer for future fans and players alike. It helps people looking back on the league’s history gain perspective of the league’s best players during a certain year or era. Basketball fans and historians looking to gain more knowledge about “the old days” can look back at certain benchmarks – NBA Champions, MVP awards, etc. — and stick pins into important milestones of the league they love.

I have always been told that Bill Russell is one of the greatest to play the game. Obviously, Bill Russell doesn’t need validation from me, but aside from some old black-and-white footage, there isn’t a lot of proof of his greatness. Yes, he won 11 titles but Steve Kerr won 5 rings and he was never even the third-best player on his title teams. That’s where honors like the league’s MVP come in handy to fans who want to understand how amazing historic players were.

This conclusion can be made about a lot of older superstars (Bob Pettit, Wilt Chamberlain, Oscar Robertson, etc.) who played before the advent of every game being shown on television. There are many great players who have never won the award, so looking at only MVPs can be a bit misleading, but it provides a great 10,000-foot view of the league and who dominated it during certain time periods.

The voting for the most prestigious award in the league is very organized, with 100 of the league’s media members making up the voting pool. There is also a fan vote which doesn’t count in the final tally, but the league has made great strides to become one of the most fan-focused professional sports league.

Before the 1979-80 season, the MVP Award was voted on by the players. Issues arose with this method for a couple of reasons. Firstly, the players had favorites and played those during their voting which could drastically sway the MVP outcome. Second, it was a tall task to be a professional player for your team day in and day out and still devote enough time to think about the MVP and who they were going to vote for.

The NBA has made other changes to the MVP voting rule throughout the years. Up until the 2016-17 season, local team television and radio broadcasters were able to cast their votes, but the NBA decided to take the vote away from the local media members for a more impartial outcome. Although the decision was controversial, many team broadcasters agreed with the NBA’s call.

You may be thinking, “Where did they get the point total from only 100 MVP votes?” The MVP votes are weighted with a point system that breaks down like this:

Every MVP winner is special, but there have been some pretty interesting statistics and unforgettable seasons among the MVP winners. From who the only unanimous MVP vote-getter was in history (you may be surprised), to the players with the most MVP wins ever (you probably won’t be surprised), we break down some of the best below.

Jabbar may have arguably the greatest, and most interesting, career in NBA history. He played for two decades, which is almost unheard of during the era in which he played, and he is STILL the league’s all-time leader in points scored. Some of his MVP stats are pretty bonkers too. Jabbar is the only MVP winner to have won the award during a season where his team didn’t make the playoffs, in 1975-76. He is also the only player to have won the award 6 times.

Karl Malone was 35 when he won the award, making him the oldest player to ever win it. Malone’s 1998-99 season was a bounce back from the previous year when Michael Jordan took home the award. Malone averaged 21 points, 11 rebounds, and almost 5 assists to take home the trophy. In an era where Michael Jordan, and his Bulls teams, reigned supreme, Malone was often overlooked, and one of the only players to grab the award away from him.

It is unfathomable to believe that a rookie has ever won the MVP in his very first year in the NBA, but it has actually happened twice in the league’s history. The first to shock fans and take the league by storm right out of college was Wilt Chamberlain in 1960. He averaged a jaw-dropping 37 points per game and added 27 rebounds to take the league by storm and become the Most Valuable Player.

The second to win it as a rookie was Wes Unseld of the then Baltimore Bullets (now the Washington Wizards). While many question him winning it his rookie year in 1968, he did it nonetheless with a stat line of 13 points and 18 rebounds per game, while also leading the Bullets to the best record in the league.

Of all the great seasons we have witnessed in the NBA, it is surprising that there has only been one player unanimously take home the award. Stephen Curry was that player in 2016 when his Warriors made history by earning the best record in NBA history with a 73-9 finish in the regular season. He scored 30 points per game and averaged 5 three-pointers per game shooting 45% behind the arc. Did I mention he added nearly 7 assists and 5 rebounds per game too?

I could go on forever about the history of the MVP Award, but the fact of the matter is that it shows the fans just who is the best in a given year. Looking back with the gift of hindsight there were some misses, but overall the winners were the faces of the league that season. The MVP Award will always play a huge part in the history of the league and I get excited thinking about the next crop of superstars in line to take home the trophy.

Who is your favorite MVP in the history of the NBA? Let us know in the comments below!