When Does NBA Training Camp Start? 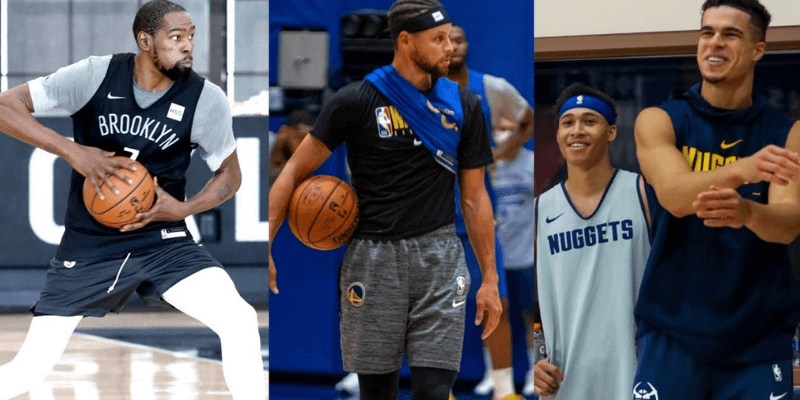 Although the NBA has become a year-round sport thanks to its exciting-yet-unpredictable trades and free agency moves, training camp marks the start of on-court action. That’s the date NBA fans circle on their calendar. Most seasons start in mid to late-October. However, this season will be different as the COVID pandemic wreaks havoc on every aspect of life.

It may be confusing if you aren’t caught up, so let’s see when training camp usually starts during normal years and what this year’s schedule is. But first…

What Is NBA Training Camp?

Training camp is a key element to the evaluation and construction of NBA teams for the upcoming season. Coaches take inventory of their teams—the returning players, rookies, and new acquisitions made in the off-season—and formulate a game plan for the upcoming season. Players use training camp to become familiar with their teammates and get as many reps together as possible.

In past years, players would use training camp to get back into shape after taking as much time off from basketball as possible during their offseason. Now, players remain playing-fit for the entire year, making them more efficient during pre-season and extending their careers long past their prime. LeBron James is a great example of this: he still performs at a high level even as he enters his 18th season this year.

Some teams utilize training camps to bond, on and off the court, building trust between players and coaches. The Los Angeles Clippers spent the first few weeks of their training camp in Hawaii last season. The atmosphere there is peaceful and beautiful, allowing players and coaches to break free from their everyday lives and focus solely on preparing for the upcoming season.

The COVID pandemic threw a big monkey wrench into the NBA’s 2019-20 season. The NBA took an aggressive yet innovative approach to the restart. They created “The Bubble” at the Disney Resort in Orlando, Florida, to complete the NBA season—an abbreviated 8 games for the top 22 teams in the league, then the playoffs.

They finished successfully—not one positive test in over three months once teams were in the bubble. Almost immediately after the Lakers were crowned champs, however, the focus was on next season. The NBA was aggressive again, announcing that the 2020-21 season would start on December 22nd.

There are still many question marks as the regular season schedule isn’t out yet. However, the league has confirmed the start of training camp: December 1st, 2020. The NBA Draft occurred on November 18th, and free agency opened up on November 20th. Now all the league needs is a completed game schedule and a whole lot of luck. Sports fans have seen how COVID restrictions affected other leagues and are hoping for the best.

Is December 1st Too Early?

One of the big stories surrounding the start is whether or not the NBA is rushing the season. LeBron James and the Los Angeles Lakers just lifted the Larry O’Brien trophy on October 11th. They’ll begin training camp less than two months after completing the season. While it’s true that some teams have been off since March, it’s impossible not to bring up the quick turnaround time as a potential problem.

The start date is more confusing to the players and coaches than anything. Last season was over a year long. Many teams have gotten more time off the court than on, but it was a trying year for everyone. Asking them to play again may be pushing it. Let’s take a look at some numbers surrounding the December start date:

287: Number of days between games for the Golden State Warriors if they play on opening night this upcoming season. They lost to the LA Clippers on March 10th, 2020, and this season begins on December 22nd, 2020.

427: Number of days between the start of the 2019-20 season and the 2020-21 season. Last season opened up with a double-header: the New Orleans Pelicans facing off with the Toronto Raptors, followed by the battle of Los Angeles between the Clippers and Lakers. Which teams will open up this coming season?

When Did Training Camp Start: Past Years

As NBA fans, our hope is that the past year is a complete anomaly and that our sports schedules get back to normal soon. Let’s take a look at past seasons and their training camp start dates to see when teams open up training and practice in traditional years.

The NBA Playoffs normally wrap up in June, leaving approximately four months for players to rest up and prepare for the start of next season in October. While team front offices never seem to relax, players take their end of the year vacations to faraway lands to detox. Then, there are training camps, which tend to start in late September or early October, depending on when the season begins.

Players understood the importance of salvaging last season during the height of the COVID pandemic. This coming year, though? Many players wish they had some breathing room before training camp begins. They worry the lack of downtime could be detrimental to their overall physical health. But the league needs revenue. Time will tell. If player injuries begin to pile up, the NBA may regret its decision.

Training camp is a great place for teams to build chemistry. It’s great for coaches to evaluate their talent and decide how each piece of the team fits together. Last season and this coming one are two rare instances of wonky training camp schedules. However, the league understands the importance of playing—and players understand that if they don’t play, they lose their salary. December 1st will be an exciting time because it marks the start of season preparations. I know I’ll be tuned in!