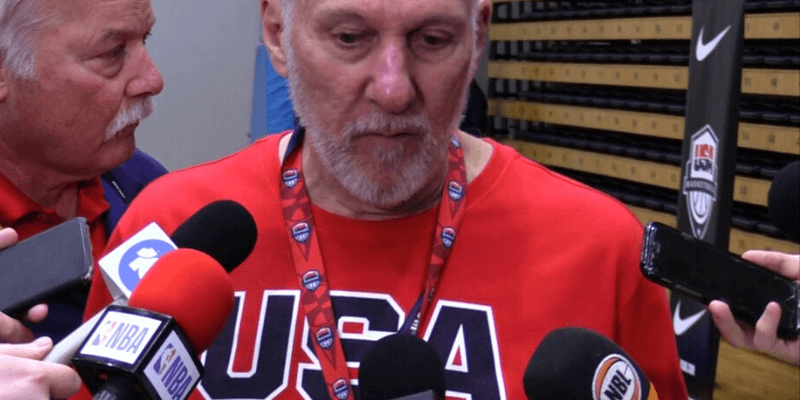 The United States Men’s Basketball Team has stood at the top of the basketball world since the inception of the sport. This article documents every loss USA Team has received from 1990 to 2019.

An important tradition to point out for USA Basketball (USAB) is how they choose their squads for the two main tournaments: the Olympics, and the FIBA World Cup. USAB will select a developmental squad to compete in the FIBA World Cup. Allowing young talent to become accustomed to international basketball and playing in the USAB system.

Once the Olympics roll around, the players who suited up for the FIBA World Cup squad are expected to step down. As the roster spots will be filled by America’s premier basketball stars. Legends such as the “Dream Team” come to mind.

No matter what team takes the court for the red, white, and blue, it takes incredible will and love for the game of basketball for another nation to take a win from Team USA. Every game is fought hard, tooth and nail, and serves as a benchmark of how the world has embraced the sport of basketball.

Team USA’s earliest bow out in the FIBA World Cup. As well as the first time Gregg Popovich, a.k.a Coach Pop, was handed over the reign of the head coaching position. Although the team would only place 7th in the tournament, hopes are very high for the 2020 Olympics.

The entire 2019 FIBA WC had been shaky for the Americans, not being able to dominate as other nations chipped away at the talent gap. A French squad lead by Rudy Golbert and Evan Fournier gave the USA their first loss in nearly 13 years. The game was tough, as neither team could break a lead of over 10 points.

“The U.S. has dazzling skill; the Greeks are a dazzling team.”

This quote by the Associated Press best sums up the defeat Team USA received from the greeks. The stunning talents of a young LeBron James, Chris Bosh, Dwane Wade, and Dwight Howard were not enough to topple the greek team with NO NBA players. USA would eventually place 3rd after defeating Argentina in classifications.

Led by (soon to be) Olympic champions Andrés Nocioni and Manu Ginobili, Argentina was more prepared for the 2004 Olympics than the Americans. The most recent Olympic loss by Team USA leading to the 2020 summer games. This loss reignited the fire for absolute excellence from USA basketball, as America would bring home gold for 3 consecutive years.

The 2004 Olympic Summer Games would mark the second time Lithuania would best the American giants. A 1998 FIBA World Cup win four years prior would give the Lituania squad confidence to take it to the Americans on the world’s biggest stage. However, the Americans would deliver the final blow in the bronze medal game, leaving the Lithuanians empty handed by the time the 2004 Summer Games came to a close.

Previous to Puerto Rico’s victory, the last time the United States would take an Olympic loss was to the Soviet Union nearly 16 years prior. This defeated would shock the world as it would come in the first round, on the first day of the Summer Games. This 19 point defeat inspired the rest of the world into believing that the 2004 gold medal for basketball was up for grabs.

A rotating door of head coaches for Team USA could be the biggest culprit in America’s dismal tournament finishes in the post dream team era. By starting the tournament off with 2 losses, the Spaniards smelled blood in the water and knew the USA’s home-court advantage was not going to be enough to pull them through this tournament.

Determined to win their 5th FIBA World Cup, Yugoslavia would bring the battle to the Americans for 4 straight quarters. By the 4th quarter a lead of only 6 points would separate the two countries. A buzzer-beater miss by a weary USA squad eliminated their shot at overtime and a podium finish. Yugoslavia would go on to win the FIBA World Cup, beating the Argentinians in an exciting overtime match.

A preview to Team USA’s Olympic knock-out in 2004. The tight and tough Argentina squad made waves with their upset on the American favorites. Ginobili and his fellow countrymen came sprinting out of the gate, scoring 34 points in the first half. Although the Argentinians would only place second in this tournament, they would bring home gold two years later during the Olympics.

If the United States has one archenemy in international basketball, it is Russia. Even back when European superpower was known as the Soviet Union, the Russians would prove to be the American’s greatest challenger. Beating the USA a total of 6 times in FIBA World Cup matches, and twice during Olympic games. Delivering the first American Olympic loss in 1972.

The first post “Dream Team” Loss by the United States. Featuring a USA squad full of “who the heck is that guy” type of players, especially to fans in the modern basketball era. Lithuania saw the opportunity to challenge the American squad early in the tournament. While they may only have placed 7th in the tournament, the day 2 defeat of the Americans set a tone for the tournament and the decade to come.

Yugoslavia would take 1st place during the 1990 FIBA World Cup after handing USA their 2nd defeat in the new decade. The American squads of the 90s can be considered the best the USA has ever produced. The 90s also an important benchmark in international basketball, glimpses of greatness and stardom appearing in foreign teams.

The 90s are considered by many NBA fans as the golden age of the sport. The Dream Team and more TV sets in American homes drove the sport into the stratosphere. The game of basketball being nurtured in countries around the world, growing international talent. While this Puerto Rico win would be one of four losses USA would receive in the 90s, it would prove the American’s mortality and set the stage for the 2004 Olympic Games.

Over the 29 year span from 1990 to 2019, USA Basketball has been beaten only 13 times. A feat that every nation would highlight in their athletic history book. Since USA is not only the best in the sport, but also the inventor of the game. A title and honor that Team USA holds very high.

No matter what tournament or what time of year, if Team USA is on the court, the talent playing will represent the best in the world at the time they are playing. The coaches and players over at USA Basketball understand the role they play for the sport.

Every time they compete they must play at their peak. So that whatever nation faces them on the hardtop, the game at hand is the absolute best man-kind has to offer. Then when another nation defeats the Americans, they can proudly claim that their hoopers are ballin’ with the best.

Is the rest of the world closing in on the talent level the USA plays ball? What country is the closest to reaching the crown of the best basketball nation? Is the modern American basketball squad better than the Dream Team? Tell us what you think in the comment box below.