Who Is Suleiman Ali Nashnush 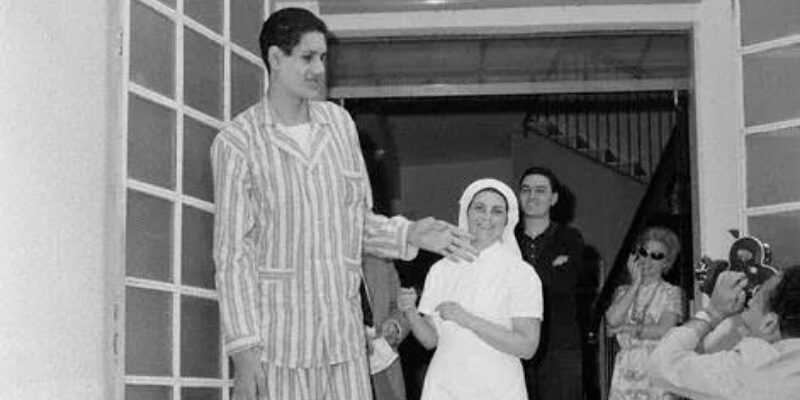 Have you ever wondered what it would be like to face off against a seven-footer in a basketball game?

Currently, 7’5” Boston Celtics’ center Tacko Fall is the tallest player in the NBA. Just imagine trying to get a shot over the outstretched arms of Fall without getting every ball swatted back into your face.

Tacko Fall is enormous—but have you ever heard of the mythic eight-foot basketball player from Lybia named Suleiman Ali Nashnush? That’s right, there was a player, though never in the NBA, that was eight feet tall!

Born in 1943, Suleiman Ali Nashnush was a Lybian basketball player and one of only 20 individuals in medical history to reach or surpass eight feet in height. He also holds the Guinness World Book of Records for being the tallest basketball player ever, both professionally and internationally, due to his time on the Lybian team.

Nashnush was a medical anomaly and the eighteenth tallest person in the history of the world.

He starred in an uncredited role in a movie called Fellini’s Satyricon. The film was made by the Italian director Frederico Fellini in 1969, seven years after playing on the Lybian National Basketball team.

Why Was Suleiman Ali Nashnush So Tall?

It isn’t documented anywhere as to what Nashnush suffered from. Several medical issues can cause this type of growth, however.

Gigantism refers to growth due to excessive action of something called insulin-like growth factor or IGF-I. It results in tallness, mild obesity, and exaggerated size of hands and feet. Former professional wrestler and self-proclaimed “Eighth Wonder of the World” Andre the Giant suffered from it.

The side effects of gigantism, however, are often problematic. Many with the condition experience terrible headaches, visual changes, tumors, carpal tunnel syndrome, and greater potential for heart disease later in life. Their lifespan tends to be shorter than average as well.

Another, more common medical condition that uncommonly tall individuals suffer from is acromegaly, which causes enlarged skeletal extremities. This is due in large part to the overproduction of hormones.

In 1960, Nashnush underwent surgery to address his abnormal growth. He died in February of 1991 at the age of forty-seven in Latvia.

Suleiman Ali Nashnush will ultimately be known more for his abnormal height than his abilities on the court or in front of the camera. He certainly maximized his life, however. Nashnush’s height took him to the highest peals of Lybian basketball; he was also able to star in a film directed by one of the most influential filmmakers who ever lived. His work while he was alive will help people remember him as more than just a larger-than-life figure.

What is the tallest person you have ever seen in real life? Let us know below in the comments section!