Why Are Basketball Players So Tall? 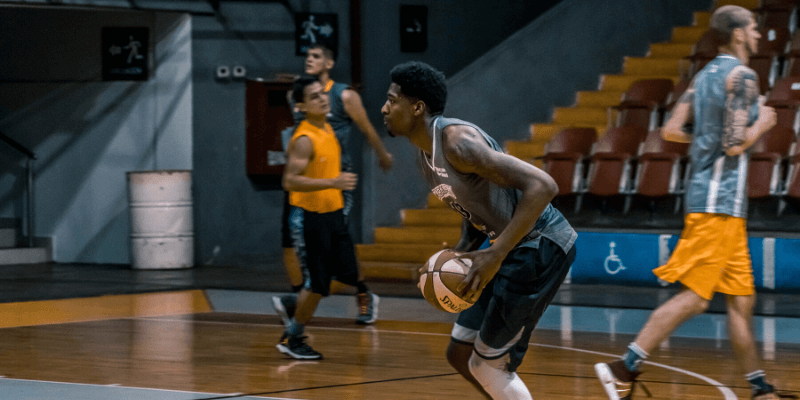 Ever wonder how it feels like to be as tall as former NBA player Gheorghe Mureșan? Gheorghe is 7’ 7’’ tall and has trouble navigating his large frame in most situations where we wouldn’t think twice. His height, while possibly an inconvenience in everyday life, was a great advantage during his NBA career.

But have you ever wondered why many basketball players are tall? In this article, we are going to take a look at the average height in the NBA, the advantages of being a tall player, and the tallest basketball players in the history of the NBA.

Average Height in the NBA

In the 2018 – 2019 season, the average height of NBA players was 6’7’’. Scouts usually search for young players who are tall in hopes that their potential talent ends up catching up to their height when they mature.

Advantages of Being Tall In Basketball

NBA fans are all aware of how talented the Los Angeles Lakers’ power forward, Anthony Davis is. However, Davis wasn’t always the tall imposing figure we know him as now. Davis was actually referred to as “the little guy who shoots threes from the corner” in junior high school. By the end of his sophomore year, he was 6’4’’. Davis started getting some attention after he grew to 6’8’’.

The point is that height in basketball can be a huge advantage if utilized properly. Here are some aspects of having height as a basketball player and how being tall can play a huge part in your game.

It helps you block shots and protect the rim on defense

Have you ever taken a shot with a big man in the paint waiting to swat it into the stands? If that happens just once during the early part of a game, the offensive team will constantly be anticipating that same outcome whenever they take the ball into the paint. Even if the tall defender doesn’t block the shot, the possibility is always in the back of the offense’s head.

It is easier to finish at the rim

The basketball hoop is 10 feet high, the taller you are, the easier it is to finish. Tall players can dunk easily as well and don’t have to worry as much about their shot being blocked because they can out jump a lot of their competition.

Longer strides can be beneficial to a player especially on fast breaks. If you are taller, with longer legs, you will have that advantage over smaller players and should be able to beat them down the court for an easy bucket. The same can be said if you are on defense. You can make it down the court quickly to either break up a basket or block a layup.

The general rule when it comes to measuring a person’s wingspan is that the wingspan is equal to your total height. However, in the NBA, some players have a greater wingspan than their height giving them an advantage for going after rebounds underneath the basket. Theoretically, this should make it easier for taller players to get more rebounds than shorter players.

Some potential disadvantages to being really tall could be accompanied by a player’s coordination. Dribbling can be a challenging task because the ball has to travel for a long distance from the floor to your hand. This makes it easier for defenders to steal the ball.

Some tall players also have a slow reaction speed. While being tall is great for blocking shots, if a player were to get the shot off before you jump to block the shot, then your height is no longer an advantage.

Tallest Players Ever in the NBA

Gheorghe is a retired, Romanian basketball player, who played in the NBA from 1993 to 2000. His height was his most famous attribute and his career never amounted to much aside from his Most Improved Player award in 1996.

Bol, who passed away in 2010, played in the NBA for 10 seasons from 1985-1995. He will always be notorious for his legendary height and superb ability to block shots. Bol came from a family, which was rich in height. His mother and father were each 6’10’’ and his great-grandfather was 7’10’’!

Bradley is a retired basketball player who played for the New Jersey Nets, Philadephia 76ers, and the Dallas Mavericks between 1993 and 2005. He showed signs of promise during his career but ultimately never lived up to his expectations.

Let’s admit it, height is very crucial in basketball. It can improve your performance in several important aspects of the game, but having height doesn’t guarantee your success as you saw with the players we covered in the article.

Who is your favorite all-time “big man”? Let us know what you think in the comments below.