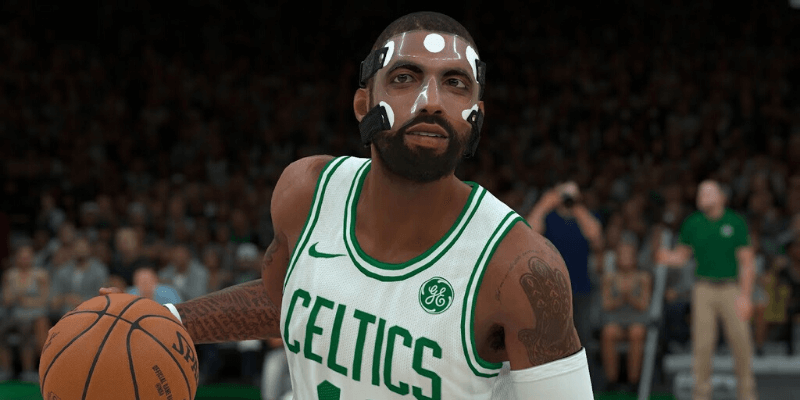 The game of basketball is full of surprises.

One minute you’re enjoying a game with a clear view of the faces of players. Another minute, it looks like a game between superheroes and villains—wearing strange masks.

Have you ever asked yourself why the players wear masks? We know it makes them look cool. But, in reality, wearing a mask for a game goes beyond looks.

The mask helps players heal fast and protects them from potential injuries.

Now you’re wondering whose idea it was to wear a mask in the first place.

Well, there’s indeed no smoke without fire. It all started from somewhere.

Did you say where?

All the answers to your question lie in this article. We’ll take you through the history of masks in basketball, the reasons behind wearing them, and players that made the mask look cool.

Where Did It All Start?

Far back in the 80s, basketball players encountered a lot of facial injuries.

When players had facial injuries they were left with two options: chill in the crowd or on the bench till the match was over; the second option was to wear a mask—whether it fits or not.

As simple as that sounds, chilling in the crowd or on the bench was devastating for players that planned to make their input count in every match.

The second option that looked like a solution seemed to complicate injuries because the mask was a “one-size-fits-all”—which complicated the facial injuries of those it didn’t fit.

Here are three primary reasons why players wear a mask:

To Play with Face Injuries

Sometimes, it’s quite difficult to avoid many elbows in the game. The implication of the impact is face injuries like a broken cheekbone or nose. So, the mask helps to protect the affected area and avoid another hit. For instance, Mike Conley had a fractured facial bone, and he wore a mask to speed up his healing process.

Basketball players that use face masks for protection believe that it’s safer to prevent injuries than getting one—which is a good step.

To Make A Statement on the Court

When players wear masks on the court, it means different things to fans and opponents. To the fans, it looks cool. And to an opponent, it seems intimidating. So, it shouldn’t be hard to understand how Kobe stole the show in 2012—when he switched from a clear to a black face mask.

Let’s take you through a list of some basketball players that took the mask seriously:

Kobe made it to the court with a mask. When he did, the mask sold for over $50,000—fascinating right?

In 2006, Tracy had no option than to opt for the mask because he got elbowed in the face—and he needed to heal fast.

LeBron wore face masks on different occasions—when he sustained injuries. From the days of Cavaliers to Heat—he wore the mask so much that he thought he should spice things up a little. He wore a black mask instead of the usual transparent one. It earned him the nickname—dark knight.

But, all that drama ended as the NBA banned it—because it gave him too much advantage in the game.

Russel was doing his thing on the court when his teammate, Andre Robinson, accidentally kneed him right in the face. Russel had no other option than to wear a clear mask to speed the healing process. Fortunately, he was able to nail 49 points in one game with his mask.

Rip broke his nose three times, so he needed the mask more than ever. You can call him the Godfather of the mask because even when he healed, Rip felt the need to prevent further damage throughout the rest of his career.

In 2018, Joel smashed into his teammate Markelle Fultz. The incident resulted in damage that required surgery to fix. After the surgery, he had to wear a face mask to speed up recovery.

Chris experienced a nose injury from an opponent Danny Green from San Antonio Spurs during his season in 2011 to 2012. Chris took to a face mask afterward for several weeks to heal.

Getting a face mask is an ideal thing to do if you sustained an injury in the court. Plus, you can also put it on if you want to protect yourself from any impending harm. It can also help to speed up your healing process.

The brighter side of wearing a mask is that it makes you look cool to your fans and intimidating to your opponent.

What are your thoughts about the idea behind basketball players wearing a mask? Did we miss out on anything? Hit us up in the comment session.