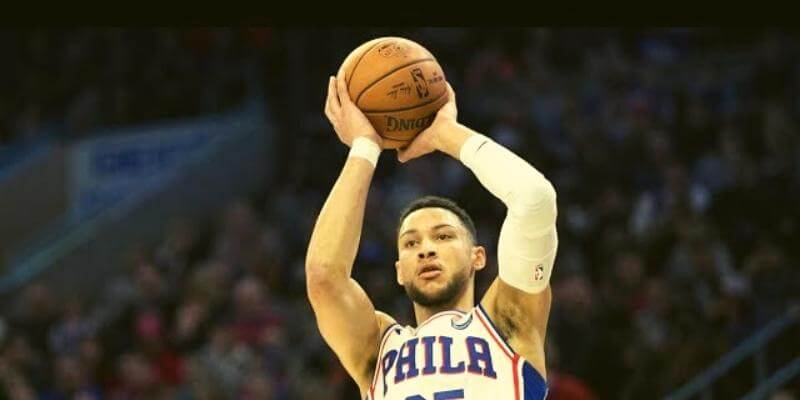 Today’s NBA is a game of long range shooting. Three pointers, once a good tool in an athlete’s arsenal, have become the cornerstone of modern offenses. Teams run on threes, and every superstar needs to be able to stretch the floor. That is, almost all of them.

Despite the overabundance of outside shooting, Ben Simmons still manages to be an excellent point guard without an outside shot. That may seem odd given recent trends but I’ll explain how he manages, as well as why his shot struggles so much, below.

He has a career three point percentage of just 14.7, and there were two seasons (2017 and 2018) where he did NOT take a single shot from beyond the arc.

That may be surprising given how every other top guard is able to light it up from outside, but Simmons plays a little differently.

He never developed a true outside shot growing up, which led to his inability to score at the higher levels.

Why that pattern came to be, however, is not as straightforward as it might seem. It’s a combination of his skill, inherent size, as well as his own mental hurdles.

Too Large to Handle

There are several reasons why Simmons doesn’t shoot.

The first is due to his size. As mentioned, he is (and has always been) much bigger than his competition. In fact, his 6’11, 250-pound frame puts him way above other NBA points guards who stand around 6’2.

His inherent size, mixed with his raw speed and quick athleticism, gave Simmons a lot of power other people couldn’t match. It’s easy for him to blow past people or get to the rim and score. That meant developing a good shot wasn’t a huge priority.

The truth is, he doesn’t play like anyone else at his position. As he’s so much bigger than other guards playing against him, he’s able to push through opposing players and go above them with relative ease. If you can get to the rim as often as Simmons, you don’t need an outside shot.

Of course, all up-and-coming players learn to shoot in some capacity. However, in his leagues Simmons much preferred to slash, cut, drive, and pass over settling for deep range shots.

He wasn’t taught not to shoot, it’s simply not his style.

Another big issue for Simmons is his mentality. Not being able to shoot is one thing, but not being able to hit any deep shot at any time is completely different. That’s especially true if you’re an NBA player who can practice as much as they want.

While no one knows for sure, it seems that Simmons has a bit of a mental block when it comes to shooting. He’s able to make longer range baskets, as evidenced by practice and pre-game footage, but when he’s on the court he just can’t put up buckets in the same way.

In fact, there was a now-infamous game when, during a playoff game with the Sixers, he passed up a wide open layup. That’s incredibly indicative of the yips, and shows he may be in his own head a lot of the time he should simply be reacting.

So, that begs the question, where does he go from here? His shooting has improved, and he continues to work, but it’s an extremely slow process.Where Simmons had multiple seasons where he didn’t shoot a single three point shot, he’s been trying to extend his range as of late.

His three point percentage was zero percent for his first two years in the league, and it went up to 28 percent in 2019 and 30 percent in 2020. However, his shot attempts are still extremely low. It’s unlikely he’ll ever become a true shooter, but he does play his inside game quite well.

Simmons is one of the brightest players in the NBA. However, his shooting (or lack thereof) has led many to think he’s hit his ceiling. There’s no way to tell if that’s true, but it seems unlikely given that he’s shown that he’s more than capable of passing and scoring with the best of them.

He may never turn into a shoot-first style of player, but that doesn’t mean he can’t score in other ways. He’s versatile, shifty, and a great defender. Those qualities mean, no matter what he does from deep, that teams will be lucky to have him for years to come.