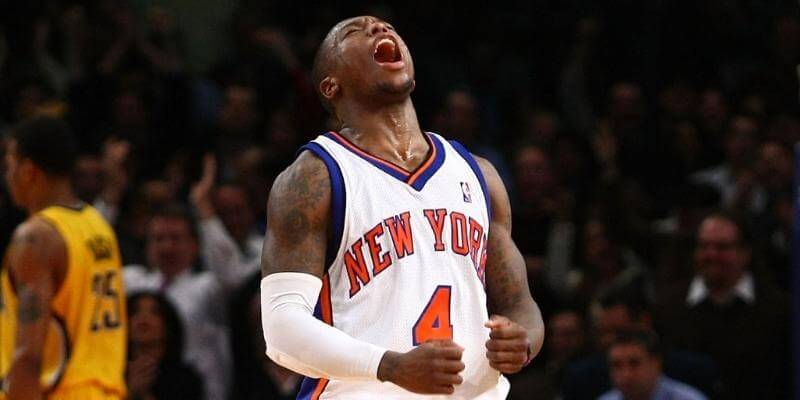 The story of Nate Robinson’s ascension to the NBA is an interesting one. The undersized point guard – he stands at only 5’9” – defied the odds to make it into the NBA, a league constructed mainly of giants.

Robinson’s NBA career spanned across 11 seasons ending in 2015. Even though his last game was in 2015, he continued to play basketball overseas until 2018. He has many hobbies outside of basketball and also debuted as a professional boxer in November of 2020.

So, if Nate Robinson continues to stay in shape at an elite level, why isn’t he still playing in the NBA? Some younger fans are probably wondering aloud, “isn’t that the guy Jake Paul knocked out in the boxing ring?”

We will answer that and more in this article about Nate Robinson’s compelling life and basketball career.

While many questioned Robinson’s size and whether or not it would hurt his chance of becoming a pro athlete, nobody could deny his strength and speed. His physical gifts were likely inherited by his father, Jacque Robinson. Nate’s dad played football at the University of Washington – later Nate’s alma mater – and earned MVP honors of both the 1982 Rose Bowl and the 1985 Orange Bowl. After college, Jacque spent two seasons in the NFL.

Nate excelled in track and field and football on top of being a star hooper and actually went to the University of Washington on a football scholarship. He played in 13 football games in ‘02 and started half of them at cornerback. The same year, Nate averaged 13 PPG for the basketball team. At the beginning of his sophomore year, Robinson decided to focus solely on the hardwood and leave the football field.

Robinson continued to improve on the court, avoiding a sophomore slump and being named All-Pac 10 First Team. His junior year was even brighter as he led the team to the Sweet Sixteen. The national attention Nate garnered in the NCAA Tournament was important. After his junior year, Robinson declared himself eligible for the 2005 NBA Draft. He was selected by the Suns 21st overall but was traded the same night to the New York Knicks.

Nate Robinson burst onto the NBA radar during All-Star Weekend in his rookie year. Participating in the 2006 Sprite Rising Stars Slam Dunk Contest, Robinson shined. Robinson jumped over slam dunk legend Spud Webb scoring a perfect 50 score, in the highlight of the contest.

Nate’s tenure with the Knicks saw consistent improvement every year. A career-high 17 points per game average in 2008-09 was the pinnacle of his time there. The team, however, underachieved, never reaching the playoffs.

From 2010-2015, Robinson played for seven teams. He experienced some success, including a big supporting role for the Chicago Bulls’ playoff run in 2012 (after the injury to Bulls’ star Derek Rose). His play earned him a multi-year deal with the Denver Nuggets but ended up falling out of favor with the team. Two more stops – not including a second Boston stint that lasted 2 days – with the Clippers and the Pelicans before being out of the league for good.

Nate never won an NBA title in his eleven years but did experience some team success. He had some big moments with the Celtics during their 7-game loss to the Lakers in the 2010 NBA Finals as Rajon Rondo’s backup. We already mentioned the Bulls team Nate played on that made it to the Eastern Conference Finals in 2012. While he never won a ring, Nate showed that he could be relied on in a big game, especially as a supporting cast member.

After The NBA: What Happened?

After being waived by the Pelicans, Robinson spent the next three years bouncing around. Stints with the Israeli Basketball Premier League, D-League, the Venezuelan LPB, and the Lebanese Basketball League were short before Nate called it quits. Nate earned over $20M in NBA salary over his career but loved the game enough to squeeze a few more years in other arenas.

Overall, Robinson’s career was very productive. And, at only 5’9”, Nate took advantage of every opportunity he was given. He was always a physical freak and still managed to stay relevant through his business pursuits and on the sports scene.

Robinson released a book in 2014, shortly before retiring, called Heart Over Height and opened up a chicken and waffles joint in the same year. In 2016, a year after his last NBA game, Robinson switched back to football! His hometown Seattle Seahawks called and offered him a spot on their practice squad.

At the age of 36, without much past experience, Nate Robinson decided to take on boxing. Because of his strength and already strong conditioning, it wasn’t a stretch when the news of his pro debut hit. Looking at him in his boxing attire was nowhere near the same sight of a retired athlete getting in the ring. He was ripped and has always been lightning fast.

Robinson’s opponent, Jake Paul, was a 23-year-old YouTube star dipping his toes into professional boxing himself. The two met in the undercard of the Roy Jones Jr.-Mike Tyson PPV. Nate’s performance wasn’t what he had hoped. He got knocked out pretty handily in the 2nd round and became a viral meme for a few weeks. There have been other offers for Nate to fight but nothing has been announced since he hit the pavement versus Paul.

As you can see, Nate Robinson has stayed busy since hanging up his kicks. These other pursuits are a big reason that he isn’t playing basketball anymore. In many ways, the game has passed him. He is also 37 years old. Not many players continue to play the game at a high level his side of 35.

There are a couple of reasons Nate isn’t playing basketball anymore but the top could well be Father Time. Based on the post-NBA decisions he has made, he certainly won’t be caught relaxing in retirement.