Why is Stephen Curry Famous and How He Did It? 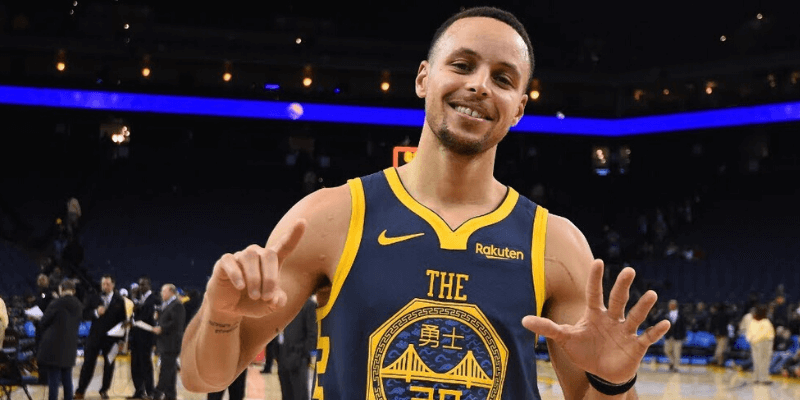 Stephen Curry is one of the most famous athletes in the world. His stardom has risen quite rapidly due to his amazing ability on the basketball court, but also due to his likeability in post-game interviews, on social media, and on his television appearances.

His wife, Ayesha, has also gotten in on the action parlaying her husband’s stardom to leverage various cooking show opportunities on both ABC and the Food Network. Their 3-year old daughter Riley even got a chance to sniff the limelight when she infamously sabotaged one of Steph’s post-game interviews during the NBA Finals a couple of years back and was the talk of the sports world for a solid 48 hours.

While there is no denying the stardom of Stephen Curry in 2019, his rise was somewhat unpredictable. It’s easy to forget that he began his college basketball career at a small Division 1 school named Davidson just three years before entering the NBA. In fact, even Curry himself may not have guessed he would reach these types of heights back when he started playing college ball simply for the love of the game.

So how did he get to this point? In other words, “Why is Stephen Curry Famous, and How Did He Do It?” Here are a couple of huge factors that led Curry to this level of fame.

Sure, just because one of your parents is/was famous, definitely doesn’t mean it is a lock for you to follow in their footsteps. Michael Jordan is the greatest basketball player ever and his children have gone through life relatively unnoticed.

But as it went, Dell Curry was known as one of the greatest shooters in NBA history. He had a lengthy career in the NBA and while he was never hall-of-fame caliber, he was fun to watch play and had a name that rolled off the tongue. Also, in terms of famous, Dell Curry had it relatively mild. He didn’t possess the fame that would have fans mauling him at every street corner but he was known well enough in the basketball world that hoops fans took note when his oldest son began excelling on the court.

Stephen Curry learned everything he knew about the game from his father at a young age, practically growing up in NBA arenas. He has told numerous stories about him and his siblings hanging out in “Dad’s” locker room, or shooting around at practice, or attending all of his games. His knowledge of the game was a huge factor in his style of play and confidence going into college. Then his star rose a bit quicker one fateful March in 2008 with the Davidson Wildcats.

Steph Curry’s Davidson team came into the 2008 NCAA Tournament seeded 10th, meaning there should have been no hope for a deep tournament run. But Steph had other ideas. His star was continuing to rise throughout his college career. The stories about him coming from North Carolina yet still not being recruited by any of the state’s powerhouse programs had begun to creep into the narrative after an impressive regular season. That narrative shot up once the tournament began.

Davidson ripped off an unforgettable run in the tournament, beating the 7-seed Gonzaga Bulldogs, 2-seeded Georgetown Hoyas, and 3-seed Wisconsin Badgers before falling to the eventual national champion Kansas Jayhawks in the Elite Eight. Curry averaged 34 points and made more than half of his three-point attempts during the run, which cemented his place in the ranks of one of college basketball’s most exciting players.

Curry was selected 7th in the 2009 NBA Draft yet many believed that it was a mistake to select him so high. The argument against him was that he didn’t have an NBA body to succeed in the league. Many thought he would be a solid role player but nobody thought he would rise in the ranks like he did.

He had a surprising rookie year by the media’s standards, averaging 17.5 ppg and making it to the NBA All-Rookie team. He improved a bit more his next year, but still wasn’t moving the needle as a star and definitely wasn’t considered famous yet. His third year ended abruptly with a bad ankle injury that sidelined him most of the season.

After his injury-plagued year, he steadily improved his game until the 2014-15 basketball season when everything came together for him and his team, the Golden State Warriors. They ended up going on a tear throughout the whole season and Steph averaged 30 ppg and won his first MVP award. The Warriors went on to win the NBA title that year, beating the Cleveland Cavaliers led by LeBron James. After winning the title, they became NBA media darlings due to their fast-paced high powered style of play, and also due to their new “star” Steph Curry.

It seemed like if you went to an NBA arena for a game every kid under the age of fifteen was wearing a Curry jersey after the Warriors won their first championship. With success comes other opportunities, in large part, advertising deals and television appearances. Curry began hitting the late night show circuits implementing his name and face into millions of people’s households on a nightly basis.

Not to mention his deals with Under Armour and Gatorade to name a few that cemented him into sports royalty.

It also didn’t hurt to have begun a five-year bitter rivalry with the other most famous person in the NBA, LeBron James. LeBron’s Cavs and Curry’s Warriors met in 4 straight NBA Finals, with the Warriors coming out on top in three of those.

Curry hasn’t shown any signs of slowing down. In fact, he just finished his first season as host of ABC’s hit miniature golf competition game show Holey Moley. ABC just renewed the show for its second season which means that people tuned in and catapulted Curry even higher in the ranks of athletes-turned-famous celebrity.

The biggest factor that makes Steph so famous is his everyday-guy likeability that truly endears him to his millions of fans. He is a great role model for young children and always has a smile on his face, which can be noted less and less on pro athletes these days. Curry was a born star, and fame caught up with him at the right time and for the right reasons. It doesn’t look like it is slowing down anytime soon either.

Is Steph your favorite pro athlete turned celebrity? Let us know about it in the comments!

Yes, I absolutely adore him!

I learned more about my life journey when I read more about Steph’s journey in this life. I to had been on a career journey for 41yrs and 1 month and 27 days when I thought it was the right time to start thinking about retirement. In a unforseen out of seemingly nowhere came a termination to ALL I have accomplished. I had a 8yr daughter who had a diagnosis that reguired Children Hospital attention and I had thought of suicide. I was 60yrs in age and had just been diagnosed with cancer 3 days before the termination. I didn’t tell anyone because I was talking to GOD about am I dying or what now LORD am I to do? How do I tell my daughter who had lost her mother my wife to brain tumors and had to have 4 different sergeries. I thought of how I was her only hope to assure her Life success by being there for her. I cried harder than ever it seemed in my LIFE. I began hearing inside of me I have to choose between what GOD say or men, GOD says it’s transformation time for me not termination. I stopped crying and strengthen and believed GOD had spoken to me and to this very day I have continued to believe it is a transformation for me and I now minister the GLORY of GOD LOVE through the WORD of GOD to ALL. THANKS FOR THIS STEPH STORY MOMENT. IT TRULY CONFERMS OUR LIVES ARE IN THE HANDS OF THE LORD OUR GOD👈🙏📖👏