Why is Toronto Raptors in The NBA? 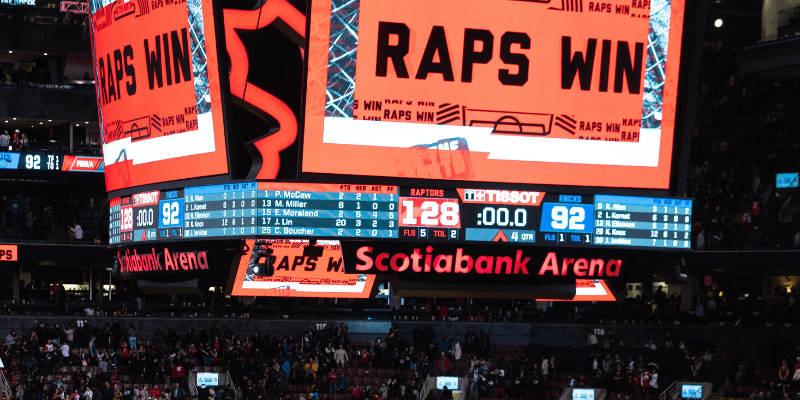 The National Basketball Association (NBA) is a thirty team league. Every single one of those organizations it sits with the confines of the United States, except one. The Raptors are just north of the border in Toronto, Canada.

While that’s common knowledge to basketball fans, many may not know why the Raptors are the only team outside of America.

Basketball is currently one of the largest sports in the world. Social media, offseason news, an exciting free agency, and tons of star power have turned it into a worldwide phenomenon.

However, it wasn’t always that way. In fact, the mid 90’s were a rough time for the league as a whole. Jordan retired out of nowhere, TV ratings were down across the board, and the league did not have any true star power.

With all of that, the NBA needed to set off some fireworks to get fans re-engaged with the sport. That is when they turned to Canada.

Major sports leagues love opening markets in other countries. The NFL often plays games in London and Mexico, while the MLB has the Toronto Blue Jays. In 1993, the NBA desperately needed to make such a move in order to open up the league.

Though they had a few international spots picked out, they eventually settled on Toronto due to its location and large market. From there, the NBA held a nation-wide naming contest across Canada to get fans involved with the new franchise.

There were many popular names, including the Huskies. However, the league shot down the idea because they believed a dog-based team would be too close to the Timberwolves.

Eventually, due to the popularity of the recently released Jurassic Park, the Raptors won the contest. The logo just edged out the Toronto Towers for the top spot.

The organization became officially established on November 4th, 1993 when the NBA gave the rights to a group of Toronto businessmen as part of a $125 million deal. They got the seventh pick of the draft, which they used on Damon Staudomire, and the rest is history.

It is worth noting that the Raptors are not the only NBA’s only foray into Canada. The organization brought on a lot of the international attention the league wanted, which then prompted them to start another franchise in Vancouver.

The Grizzlies, who are now in Memphis, came about in 1995, two years after the Raptor’s inception. However, unlike their Canadian neighbors, they did not last. The organization moved to Memphis after the 2000-2001 season when they switched owners. They are still there to this day.

Toronto remains as the only basketball team in Canada, and it seems it will be that way for quite a while. Though the NBA hints at trying to open markets in new cities, there are no such plans in place just yet.

The Kings in the North

The Raptors took home their first NBA championship this year, a feat they accomplished more than twenty five years after their initial inception. That feat cemented them as Canada’s team and pushed them to the forefront of the basketball world.

While there might be room for another team in the north, nobody is sure where they would fit in. TV ratings would likely not be as strong as they would be in another large U.S. city, and an established franchise would start off fighting an uphill battle.

A new organization in another large city, such as Vancouver or Montreal, could exist. However, in order to do it, they would have to fight for fan space against the biggest international team the NBA has ever seen. It won’t be easy.