WNBA Players Who Can Dunk 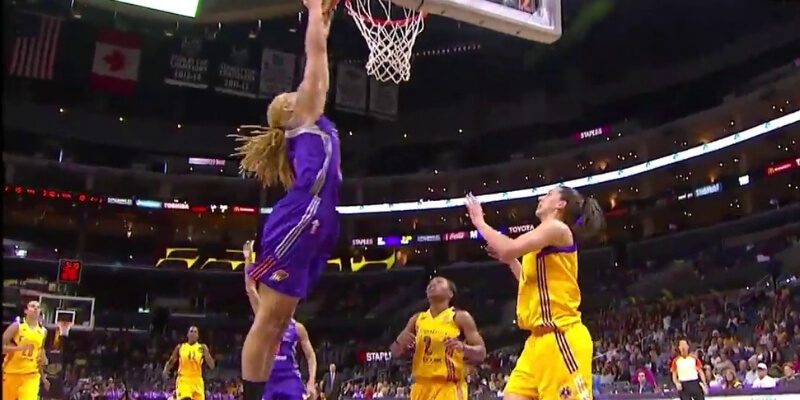 The WNBA is known for many things, but dunking is not one of them. Female athletes simply don’t tend to shake the rim much during their games. Even so, the league has witnessed a few solid slams over the years from some of their best and strongest athletes.

I have played basketball at multiple levels over the course of my twenty-five years of being a fan of the sport. That time with the game has allowed me to understand the history of both the NBA and WNBA, as well as appreciate the important moments that make each league so fun.

In this guide, I will look at the different dunks (and dunkers) in the history of the WNBA. Every single person on this list has a special amount of talent that helps take their game above the rim.

Let’s look at them below.

Dunks, while impressive, are not a huge part of the WNBA’s long history. In fact, since its inception in 1996, the league has only had seven players who have achieved the feat.

That’s not a lot, but the rarity of the event shows how impressive it is when a player gets above the rim. In addition, as players get more athletic, dunks are becoming slightly more commonplace over time.

Perhaps one of the most well-known women basketball players of all time, Lisa Leslie became the first person in the WNBA to dunk. She did so on July 30th, 2002, when she threw down a slam against the Miami Sol.

However, she didn’t stop there. The superstar would dunk one more time in her career during another game against the Sol in the 2005 season. Both dunks were record setting at the time, as they showed that female players do have what it takes to throw down a basket.

Many people believe Leslie paved the way for future dunkers, and there’s no doubt her athletic abilities influenced the others on this list.

Just one year after Leslie dunked in 2005, Michelle Snow became the second WNBA player to slam in a game. However, rather than do a regular straight-on jam, she managed to put down an impressive reverse style dunk.

The feat did happen in the all-star game rather than a regular season one, which some people used to discredit the event when compared to other players, but the sheer athleticism needed to complete the feat makes it extremely impressive.

No other WNBA player has been able to dunk with so much flash as Snow during that season.

Another highly-touted superstar, Candace Parker joined the exclusive list of female dunkers in 2008. Her slam came in the final seconds of a Los Angeles Sparks game, when she managed to get above the rim on a breakaway.

Parker always had the ability to jump. A college two-time player of the year, she was the first woman to dunk in an NCAA tournament game and the first female player to dunk twice in a college game.

Though dunking was not part of her game in the WNBA, she has dunked twice. The first was the game in 2008, while the second came later on that same season in late July. Both marks helped push the boundaries that Lisa Leslie first set up.

Though not as well known as the other players on this list, Sylvia Fowles is one of the few women basketballers to dunk. Like Michelle Snow, she did it during an all-star game.

The event happened at the end of the game and was largely uncontested. While not as impressive or impactful as a regulation slam, it’s still something only a few in the WNBA have ever achieved.

While everyone on this list is able to get above the rim, none of them can dunk quite like Brittney Griner. A pure athlete, she exploded onto the scene in high school when she dunked an extremely impressive 52 times during her senior season.

From there, she went on to become the seventh player to ever dunk in a women’s basketball game, and she is still only the second player ever to dunk twice in an NCAA contest. She also dunked twice in her WNBA debut, and has 13 dunks during her time in the league.

That’s easily the most of any WNBA player ever.

Another All-Star game dunker, Jonquel Jones managed to put one down in 2017 while playing in her first all-star game. As with Fowles, this was an uncontested shot at the basket with nothing on the line, but that doesn’t make it any less impressive.

Her one-handed slam shows that women of different sizes can get up. At only 6’6, she is one of the shortest WNBA players ever to dunk, and she was able to do it on a nationally televised stage.

While her dunk wasn’t as impressive or as flashy as the other players on this list, Liz Cambage did something truly unique: she jammed during the Olympics.

While playing for the Australian national team during the 2012 Olympics in London the 6’8 center threw down a hard dunk against Russia. Though she also dunked during a WNBA all-star in 2018, nothing is more impressive than slamming one down on the world stage.

Though it may be surprising to some, there are quite a few WNBA players who have been able to dunk over the years. Some dunks were easy and straightforward, while some were a bit more impressive.

The feat is still not commonplace by any means, but as time goes on and players get more athletic, there’s no doubt more and more female athletes will be able to fly high during a game. Who knows where the league might be in the next ten years.