What is Zion Williamson’s Height and Wingspan? 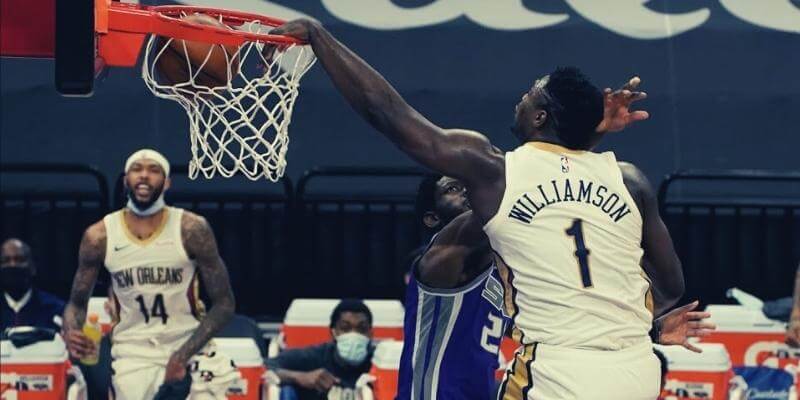 Everyone in the NBA is athletic to a certain degree. Even so, there are a few players who rise above even their peers. All athletes are big, but some are big, fast, strong, and quick all at the same time. Zion Williamson is one such example.

This guide looks at the sizable forward’s dimensions in comparison to the rest of the NBA. That breakdown shows, not just how Zion stacks up to his peers, but how athleticism can go far beyond simple dimensions.

Skill is the most important part of being a pro athlete, but it doesn’t mean as much without size. Everyone in the NBA has a lot of skill, but they also have huge frames. Players stand quite tall compared to the regular population, and they tend to have a lot of heft as well.

Though some have made it to the league despite being quite undersized, a large body and ample length are almost always required to get to the top. However, such dimensions don’t tell the whole story. Players are often more than the sum of their parts.

Not Big, but Powerful

Zion is one of the most unique players in the NBA because his dimensions are not particularly interesting on their own. He stands 6’6 and has a 6’10 wingspan. His arms are long, but he’s not a huge outlier in either category. Especially when it comes to his height.

The forward stands right at the average measurement for any small forward, and he’s undersized at the four. While his reach is a bit longer than other players at his position, his arms aren’t anything crazy. What makes Zion so special is context, and that context is his weight.

The Pelicans forward clocks in at 285 pounds. That mass makes him one of the heaviest players in the league across all positions. Even so, he has the ability to jump 45 inches and is one of the quickest players around.

Those traits, when combined with Zion’s other abilities, make him truly unique. It’s not that he’s a physical outlier when it comes to height and wingspan. It’s the strength, quickness, and raw power that perfectly backs up those dimensions.

If he was a 6’6 guard with his wingspan and a mediocre shooting ability, nobody would know his name. Having his measurements with added muscle, mass, and speed create a one-of-a-kind athlete that nobody has ever seen before.

Zion is an outlier for several reasons in today’s NBA, and one of the biggest is his playstyle. Though he can shoot here and there, he’s not a true outside threat. Rather, he depends on an old school type of basketball where he uses his size and strength to overpower opponents.

That’s not something you see in the current league, especially with the new emphasis on stretch offenses. However, Zion makes it work. That’s because he has a ton of strength packed into his stocky frame, and he doesn’t lose any speed or quickness because of it.

He’s a solid size, and has a longer wingspan. Even so, those measurements aren’t impressive on their own. It’s how Zion is able to use them on the court that makes them great. He can get through defenders, body up opponents, and sky up over people when needed.

No matter how you slice it, Zion is one of the most athletic NBA players of all time. His vertical ability mixed with his raw size and strength make him a true outlier. Today’s NBA is more about shooting than physical power, but Zion shows there’s still a place for true bruisers.