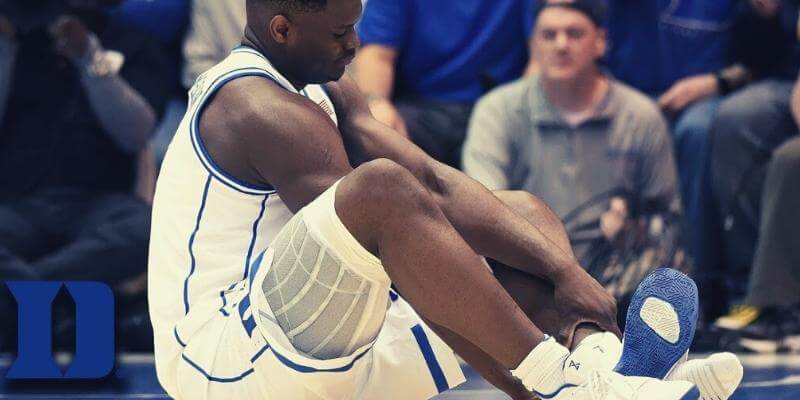 All pro athletes, even the greats, deal with injuries during their career. However, when someone gets hurt (and how badly they go down) changes how much they’re affected by those setbacks. Sometimes they bounce back quickly, and sometimes it completely derails their career.

The following sections look at the injuries Zion Willamson’s dealt with during his short time in the NBA to study how much they’ve impacted him and to see the way his recovery’s going. That will show how, with injuries, timing can be just as important as severity.

Zion is a big man packed into a solid frame. While that helped him become one of the most electric players in the NBA, it also made him quite injury prone. He’s always struggled with health issues, going all the way back to college.

His first setback came during his time at Duke. In 2019 during a big rivalry matchup with UNC, Zion hurt his knee by blowing out his shoe. He recovered quickly, but the setback was a sign of things to come. Later that year, he had two more issues while moving to the big leagues.

First, Zion only played one half of his first summer league game before going down. He tweaked something, and the Pelicans didn’t want to risk anything else happening to their new star. So, they benched him for the rest of the scrimmages.

While he had a few weeks after that, his health waned yet again when he tore his meniscus during a preseason game. That showed his susceptibility to injuries, and many began to wonder if his body could handle the rigors of the NBA. He sat out for 44 games.

The Comeback, and Fallout

Zion did a great job at bouncing back. He returned in game 45 for the Pelicans, and absolutely exploded onto the scene. He had a ton of power and skill, both of which he combined with raw athleticism to score in a myriad of ways. Even so, he still had trouble staying on the court.

He played for almost all of 2020 and the first months of 2021, but a thumb sprain kept him out for several games. Then, after the season ended, he suffered a Jones fracture in his right foot. That caused him to undergo surgery and prevented him from playing in 2022.

He still hasn’t returned. While the Pelicans are hopeful, there’s no telling when he’ll come back or what shape he’ll be in when he does.

A Roll of the Dice

Zion is undoubtedly one of the most young talented players in the NBA. Still, skill and raw athleticism don’t go very far if someone can’t stay healthy. Being able to play is a big part of being a superstar.

The forward has a high ceiling that could very well bring the Pelicans back into the forefront. However, if he’s not able to stay healthy, that could never come to fruition. Being a pro player isn’t just about being good enough to make it to the league, it’s about staying healthy too,

Zion has only played 85 games in his first three years. That’s an extremely low amount, especially for such a highly touted draft pick. If he wants to be a true all star, he’s going to have to get better soon.

Zion has some of the most potential in the NBA, but that hardly matters if he can’t stay on the court. His injuries have kept him out for nearly two years, and he’s still trying to come back. He might soon, but there’s no telling if he’ll be100 percent. It’s just a waiting game now.