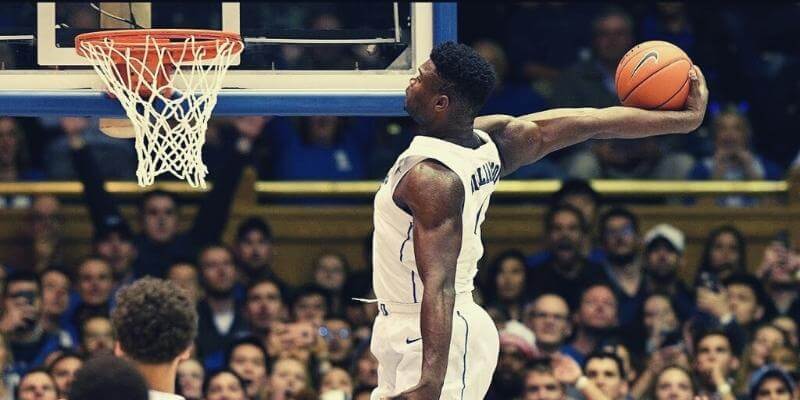 Everyone in the NBA has a strong vertical, but typically lighter or springier players are able to get up much higher than big men. However, that’s not always true. There are a few incredible athletes who break that mold.

To study that relationship, this guide looks at Zion Williamson’s vertical as well as how he’s able to use it to his advantage. By analyzing his jumping ability compared to other NBA athletes, the below sections show what makes Zion stand out in the most athletic league on Earth.

The NBA is built on physical specimens. Every player has certain qualities, be it size, speed, strength, IQ, or quickness, that make them much better athletes than even the best G league players. Some can turn on a dime, others can shoot from anywhere, and some can jump.

However, getting up in the air is not as easy for NBA players as many might assume. The average vertical across the league is 28 inches.

That may seem incredibly low, especially considering how many NBA athletes are able to get up so high, but many big men are so large that they can’t move that easily. Guards and wings bring the average up, while forwards and centers tend to move it down.

For an NBA athlete to have a truly insane vertical they have to hit the 40-inch (102 cm) mark. That’s where Lebron James sits, and it’s also where other slam dunk contest winners are at. Zion doesn’t just hit that mark, he blows by it completely.

Zion is largely considered one of the most athletic players in NBA history. However, his dimensions are not that impressive. He stands 6’6 (the average height for small forwards) and his 6’10 wingspan isn’t anything too crazy for his position either.

What makes him so special is his vertical. The all-star can jump a staggering 45 inches (114 cm), which gives him an unprecedented amount of power and hang time other athletes can’t match. He can fly to the rim from almost anywhere, and he does it with ease.

On top of that, Zion is quite big as well. As shown above, larger athletes tend to have lower verticals. The more mass someone has to carry, the harder it is for them to get into the air. Zion doesn’t follow that rule, which is why he’s able to do things other players can’t.

The Pelicans forward clocks in at 285 pounds. That’s massive compared to others at his position, and it’s big even compared to a lot of forwards and centers around the league. However, rather than letting that weight slow him down, Zion is able to explode to the hoop.

Zion isn’t someone who shoots that well or makes a living off finesse. He’s a bruiser who uses his staunch athleticism to play above the rim. His vertical and extended frame is what makes that happen.

All pro athletes can jump, but very few are able to jump as well as Zion. He doesn’t just have the ability to climb the ladder, he does it quickly and while carrying a lot of mass. That mix is what sets him apart and why he’s one of the most exciting young players in the NBA.